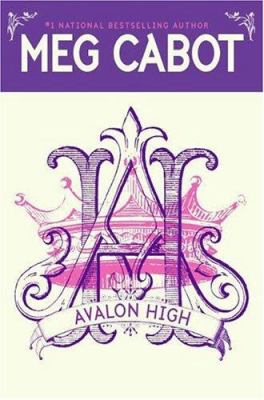 Ellie Harrison has been uprooted and moved from her home in Minnesota to Annapolis, Maryland. Her parents, both lovers, teachers and studiers of anything medieval, are both off on sabbaticals. Her mother is studying Ellie's namesake, Elaine of Astolat, and her father a dull sword that the university lent him. The only good part of their uprooting is that the house they are staying in has a pool, which Ellie loves to clean. The whole summer, she speaks her entire time eating, and floating with a book in hand. Her mom, toward the end, was not having it and forced Ellie to take her father running in the park. Passing by the inner part of the park, she spies a cute guy, a tall guy and a perky blond girl. Passing by him, she saw him smile at her.

Once at the car, she wonders what his smile meant and what was going on. When school started, she was surprised to learn that the cute guy was at her school, and so were his friends. A. William Wagner, a quarter-back football player who is so popular that you couldn't help but like him. His girlfriend, the perky blond, is Jennifer Gold, a cheerleader who is the girl who always snatches good guys. His best friend, the tall guy, is Lance Reynolds, the school's corner-back and, as it turns out, Ellie's partner on her first project. Can you guess for what class? Medieval Literature. And even worse his that they have to do the report on her namesake's poem: Elaine of Astolat.

When Ellie get home from her first day, she decides to float some more because summer is almost over. When she opens her eyes to push off the side of the wall, what a surprise she has in store when A. William Wagner is standing there looking at her. The story follows both Ellie and Will through a mystery, the mythology of King Arthur and the enemy, Mordred.

This book is so amazing! I loved it when I read it for the first time in fourth grade, and I still love it today. A few things about it though. This book, while amazing, precedes the movie. If you were to watch the movie first, or even after reading it,you would be confused for a few reasons. The movie portrays "Ellie" as "Allie". The movie also includes "Mordred" but it is not the same character as in the book. There are a few other things, but the main idea is that it is confusing. When these things are playing out, it makes a comparison every time you read the book or watch this movie. Secondly, the "mythology" is a little far-fetched. While written extremely well, I believe that if this book followed a bit more of the earlier "mythology", it would have made a bit more sense. All in all though, this book is a hit!

I am going to say, for this book that I would rate it a 4/5. This plot is so profound, and very intriguing. It has mystery and is very interesting. This makes it a hard-to-put-down book, which is great! What makes this book less than a 5 is that of the "mythology" being off. As one who is knowledgeable about this with a good sense of "mythology", it makes it hard for one to read this without criticizing this. If you like mystery and do not have such a problem with this "mythology" being off, then this should be a 5/5 for you!

Check out Avalon High at the Newport Beach Public Library.