Heir of Fire by Sarah Maas 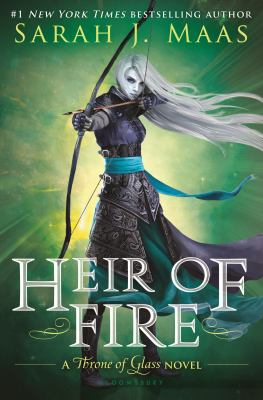 If you fell in love with Celaena in the first book get ready to fall in love with her over again because as the readers found out at the end of Crown of Midnight Celaena Sardothien is Aelin Galathynius, the lost princess of Terrasen and a Fae. Reading Heir of Fire by Sarah Maas is so unique because you get to learn about a whole new character, Aelin, even though she is technically the same person as Celaena. Celaena travels across the sea to Wendlyn on the King’s orders to kill the royal family, but she has another mission to meet her aunt, Queen Maeve, whom her mother desperately tried to keep away from Celaena. When she finally meets Maeve she is told that in order to enter into the sacred city of Fae, Dornelle, she must be trained by one of Maeve’s fiercest warriors—or as Aelin likes to call them cadre—before she will give Aelin answers to the questions she seeks. When Rowan Whitethorn is assigned as her teacher Aelin if forced to spend her mornings helping prepare meals in the Kitchen, while the rest of her day spent training her magic. Even though Aelin went to Wendlyn to distance herself from the growing darkness in Adarlan, she cannot seem escape as the darkness that seems to follow her.

While Aelin is in Wendlyn training with Rowan, Chaol and Dorian remain in the castle. Dorian learns new secrets about his blood line that greatly affect his life forever. As he attempts to live his life normally, he ends up befriending a healer in the castle named Sorscha, who soon is the focus of Dorian’s romantic attention. While Dorian is chasing Sorcha’s affection Chaol is trying to deal with Aedion Ashryver, who Aelin’s cousin and the leader of the Bane army. Aedion is loyal to Terrasen and gets Chaol roped up into his schemes.

Maas also introduces a new series of characters: the iron teeth witch clans. The witches are being drafted into the King’s army to train and ride wyverns, a dragon like creature, that the king has been breading in the mountains. The witches must compete in a game to win the title of Wing Leader. The Wing Leader will have the honor of leading the witches into battle when the time is ready and Manon Blackbeak, the heir to the Blackbeak clan, is determined to win.

Telling three different stories across one world provides a unique reading experience unlike many other books that I have read. I would rate this book a ten out of ten because I already learned to love the assassin that climbed her way to the top throughout the first two books in the series, but now the readers get to see the true Aelin who has been in hiding since her kingdom fell years ago. The introduction of new characters such as Rowan, Sorscha, and Manon Blackbeak provide an increasingly more interesting story and raise the plot to entirely new heights. Even though Heir of Fire is the third book in the series is seems like just the beginning because there are so many new elements and things to learn about the characters as the bigger plans around the king becomes even more deadly. Leaving hope and despair all in one very eventful ending, readers will immediately want to pick up the fourth book in Maas’s original and delightfully action-packed series.

Check out Heir of Fire at the Newport Beach Public Library.