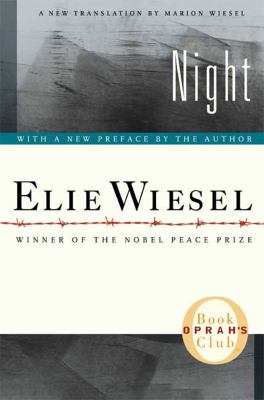 Tired of trying to find a good book to read? Not to worry, I have the solution to your problem. Night, by Elie Wiesel, is a book I have just finished reading myself and is, in my opinion, one of the best books out there for teenagers. It is about a Jewish man named Elie Wiesel and the struggles he faced in the concentration camps during the Holocaust. Later on, you get to read about all the tragedies faced by the Jews in the camps and how Elie’s faith was questioned over and over again.

The book starts off with a Jewish boy named Elie Wiesel in a small town by the name of Sighet, Transylvania. Elie was a very religious boy, always asking questions to his friend, Moishe the Beadel, about God and how to be a clean person. Elie’s father, whom he did not really talk to, is the town’s Jewish leader. He is the one who everybody turns to whenever there is a problem within the Sighet. Then one night, Germans soldiers had invaded Sighet.

At first, they were very kind to the Jews and even gained their trust. What the Jews didn’t know was that the behavior of the soldiers was about to change and that in time, their lives would be at stake. The soldiers slowly started their uprise; they started placing curfews in the town. Within a month, the Jews were forced to live in small neighborhoods known as ghetto’s. Soon, the Germans started to take roll of how many Jews their were and placed them in trucks, one day at a time. This all confused Elie and his family, consisting of his father, mother, older sister, and little sister, named Tzipora. All the Jews were placed in trucks, and then transported into a train. The train was very packed; breathing became very hard and you were forced to relieve yourselves in corners.

When the train stopped, the Jews arrived at Auschwitz, the most famous concentration camp that ever existed. As soon as Elie got off the train, he could smell the stench of burning flesh and saw tall chimneys with black smoke coming out the top. The Jews were then forced to separate into a line of women and men, which was when Elie was separated from his mother and sisters forever. In the camps, the Jews were forced to dig graves for dead Jews and shovel coal into the crematoriums (ovens meant for Jews who were too old or weak to work). The saddest part of the story I recall was from this part of the book. The Jews, when being checked up by doctors to see if they were strong enough, acted like they were strong, and the most convincing Jews were taken by the soldiers. This was the case for one of Elie’s good friends. Once Elie saw his friend after he spent time with the soldiers, he saw a look of grief in his friends face. He asked him what happened and the man responded that since he was one of the strong Jews, he was forced to put the weak Jews into the crematoriums. One of the Jews that the man was forced to place in the oven was his father. Once Elie heard this, he was in shock and felt lots of grief for his friend, trying to put himself in his friend’s position.

After several months of the same torture, the Jews were transported to another camp in Buna. Once in Buna, the Jews were forced to see babies used as machine gun practice by the soldiers. This really showed the Jews how cruel and heartless the Germans were. After a bomb raid by rogue Germans at the camp, the Jews were forced to run nine miles in the snowy night to another camp, where many Jews collapsed and died from exhaustion and some even froze to death. When they arrived at the camp, Elie saw that only 16 Jews remained alive, where there were 114 before the perilous journey. One of the men that died from exhaustion once the Jews arrived at the camp was Elie’s father. Shockingly, Elie did not feel any grief, since he had already since a lot of death and felt too much grief, to the point where his heart turned to stone. Then, Elie heard more bombings and then, for the first time in his life, saw American tanks. He then knew that he and the remaining Jews had been saved when he saw many German soldiers fleeing from harm’s way. At the end, all Elie could think about was food, not a warm bath, revenge, or looking for the rest of his family, but food. That is where the story ended.

In my opinion, this was one of the best stories out there about the holocaust and struggles that the Jews dealt with. It accurately and descriptively gives an insight to all the wrongdoings the Jews faced. I have read many books on similar topics before, such as “A Night Divided”, and Night clearly stands out from the rest. Elie was able to recall all the tragedies he dealt with and put them on paper, and I applaud him for that. I would give Night a 5/5 stars, which I don’t give many other books. I definitely recommend Night for anyone who is looking for a book that accurately describes the tragedies of the Holocaust, written by a Jew that dealt with the tragedy first-hand.

Check out Night at the Newport Beach Public Library.