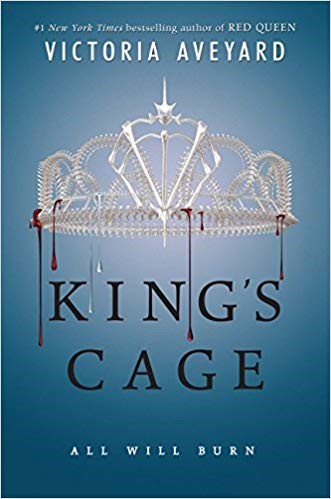 In a world of ordinary Reds and Silvers with abilities, a mutation brings forth a new kind of human—newbloods. Reds with abilities foreign to the world, abilities stronger than Silvers’. Now though, they’ve been exposed by the Silver King.

Back within the twisted king’s cage, Mare Barrow is a prisoner, powerless without her lightning, tormented for her blind trust in a seer. She lives at the mercy of the boy she once loved, maybe still. Because deep down, she hoped the traitor king would return to who he once was or pretended to be--a kind, shy boy shadowed by his brother—now that the controlling whisper, his mother, is dead. Despite it all, the mourning king, Maven Calore continues weaving his dead mother's web in an attempt to maintain control over his country—and his prisoner.

As Mare lays helpless under the weight of Silent Stone in the palace, her band of newbloods and Reds continue plotting, training, and expanding. They prepare for war, ready to bring vengeance to Maven for their captured leader. And Cal, the exiled Silver prince with his own claim on Mare's heart, will stop at nothing to bring her back.

In the third installment to Victoria Aveyard's bestselling Red Queen series, allegiances are tested on every side. And when the lightning girl's spark is silenced, who will light the way for the rebellion?

This book is the first in its series where we explore the plot through the eyes of characters other than Mare. It’s definitely warranted, given Mare is stuck between the walls of Maven’s castle for more than half the book. It made Mare’s dull routine as a prisoner more bearable. From Cameron, a feisty newblood’s perspective, I’m more accustomed to the Scarlet Guard’s rebellion for equality. From Evangeline, an unexpected allying Silver, I see the rebels from the other side. However, I long for more action, more suspense, but a trapped main character just wasn’t fulfilling the thirst. Notably, the emptiness and monstrosity from Mare lessened during her trapped days. The Silent Stone numbed her abilities, but it never numbed her heart. I MUST ESCAPE, she thought to herself, I MUST ESCAPE.

I love how I’m able to see the humanity behind the antagonist’s kingly veil. No matter what he’s been through and what he did, he’s still a boy. He’ll stop at nothing to keep Mare, the only one that makes him feel… not alone. His dead mother’s attempts to wave off his love had only added matches to the growing fire. Mare’s the only part of Maven he didn’t lose, and he’s determined to keep her, even if he has to trap her in his cage.

I rate King’s Cage a 9.99/10. I love this series, but the unending length of Mare’s stay as prisoner bored me at times. Nonetheless, this is a tale I would recommend to every teen, especially those begging for a good fantasy, because I know this will take you on an unforgettable adventure.

Check out King's Cage at the Newport Beach Public Library