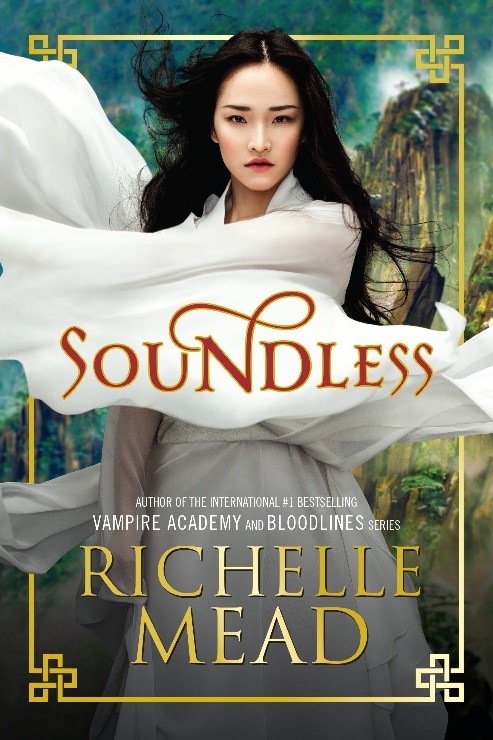 Also written by the author of international #1 bestselling Vampire Academy and Bloodline series, Richelle Mead weaves a novel that dates back to the ancient China era intertwined with fantasy mythical creatures. The story takes place in the midst of Chinese folklore in the perspective of a young teenager, Fei. For as long as she can remember, her village has thrived on top of mountain fed by whatever is down below which sends up food and supplies through a zipline. Through the dependency on the line keeper at the bottom of the zipline for food and resources, the village, once prosperous and peaceful has evolved to become a city without variety and excitement and culture. What’s more? They are a village without sound. That’s right, everyone in the village is deaf relying only through signing to communicate.

Long ago, generations and generations before, their ancestors had migrated here attracted by the fertile valley between the two mountains for agricultural purposes. The land between the mountains was perfect for growing crops and for a long time, the migratory people lived happily on their own and as legend has it along with mythical pixies. At the top of the mountains, there was also a mine where they could mine ores for aesthetic art. However as in all history, misfortune is always bound to fall somewhere along the road. The mountain pass, also the used as the fertile valley for growing crops got destroyed and blocked through a huge avalanche from the bordering mountains. As a result the village at the top became cut off from civilization at the bottom and only through the zipline could they trade their mined metals for living necessities.

Around this time, along with the disappearance of access to the rest of the world, the pixies began to leave and the village became a society with no culture only focused on mining as much as possible to sustain society. For awhile this plan had worked but then society had begun to lose their hearing. Then generations before Fei, their sense of sight had also begun to disappear and with addition of disabilities, mined ore productions decreased and so did their resources in return. Soon a classed hierarchy emerged of miners, suppliers, and painters emerged in which their classes determined the access to resources they had. The miner class was treated as filth and were avoided even though their job was the most important. They had the least access to food and were second only to beggars who were old, useless, blind, and deaf. Next came suppliers who were in charge of receiving food and the distribution of supplies. Finally came the painters who ironically had the most useless job but were valued the highest. This is the class that Fei, an orphan is in. Originally from the miners, through skill, Fei had managed to become one in the top class.

As the ailments increase in intensity and in number, Fei realizes that their village is slowly deteriorating and on the verge of chaos and destruction. However, she is hopeless and can only focus on protecting her standing in society. Guiltily. The village’s decline is only one of the worries as her sister’s sight also begins to decline along with many others.

Then one night Fei wakes up and feels a different sensation. Through her instinct and intuition she realizes that she has gotten back her sense of hearing. This hearing opens up a new world and a new idea. With renewed hearing, a world of possibilities are opened up to her. Especially the possibility of being able to rappel down the mountain to receive help from what is down below. Do to constant avalanches from mining, people have tried to rappel down but without being able to detect the source of the avalanche, they would always fail and die.

With this plan in mind, she confides in her once childhood friend, Li Wei. Li Wei is a miner however. But by teaming up, Fei and Li Wei reunite and become as one with Li Wei as the body and Fei as the mind and ears, literally because Li Wei can’t hear. Facing dangers they finally reach the bottom and what they discover is a new world. Full of wonders the city amazes them with their society structure, culture, and secrets.

Personally for me, this book was written exceptionally well in which the ending got a little ridiculous spoiling the historical fiction part of it. I’m not going to elaborate on it any more as not to spoil it but everything was good up until then and honestly to weave in such a vibrantly told story into a Chinese historical setting is truly impressive. Towards the end, I’m not quite sure what had happened but the story suddenly got far-fetched and it just got stretched to the point where it wasn’t interesting anymore. However from the beginning all the way to almost the end, the book was really well crafted with very good imagery and it felt as if we were able to perceive the world that the main character, Fei, saw it as.

I really like the characters that Richelle Mead had created. Their personalities, especially Fei’s is really colorful. Fei’s color would probably be like a purplish color in which she is constantly debating with herself over what she really values. She is an insecure girl who is selfless and is constantly worrying for the well-being of others and not hers. Contrary to her, the other main character, Li Wei, he has a more reddish color in which everything he does is bold and strong. He is also selfless but is more aggressive and is decisive.

Overall I think that the book deserves a 8.5 - 9 out of 10. IT was written overall but in my opinion the last part of the story got a bit ridiculous and ruined the authenticity of the setting that was set throughout the book.

Check out Soundless at the Newport Beach Public Library