Through a Window: My Thirty Years with the Chimpanzees of Gombe 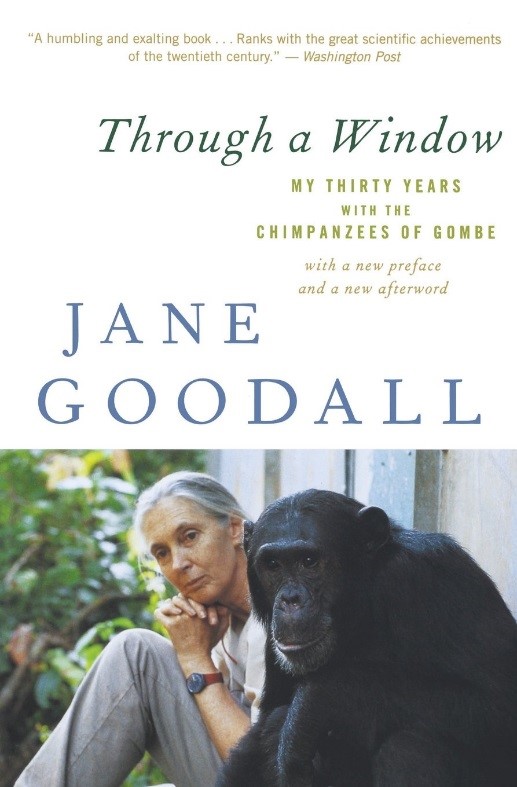 The book Through a Window: My Thirty Years with the Chimpanzees of Gombe is a nonfiction research book that is written by Jane Goodall. In Through a Window, she describes her stories about her travels in Gombe over 30 years, studying chimpanzees, our closest relatives, and how they interact. Through her research, she covered many topics, such as friendships, social rankings, mating routines, and many more aspects of chimpanzee behavior. Goodall notes that when she started her research in 1960, most scientists accepted the idea that chimpanzees and humans were closely related physically, but not their minds. Her book was not written to prove a point, although it gets a point across with research data. Through observing many actions of chimpanzees, her research showed that there are also many similarities between us in the way we act and behave. This book would be appealing for people interested in science and behavior of both humans and animals. On a scale of 1-10, I would rate the book a 7 for people not interested in science, and a 9 for people who are interested in science and animal behaviors.

In her book, Goodall states that chimpanzees show territorial and aggressive behaviors that are similar to the ones of humans in war. For example, when chimpanzees are going into a battle they intimidate each other and rally their own friends to help fight. While Goodall was observing chimpanzees in other chimps’ territories, she noticed that after being alerted by a call made by the chimpanzee named Figan, the other chimps began to display, vigorously and noisily. Chimpanzees defend their habitat just like how humans defend their territory over a disagreement. While in a fight, they care for each other by joining their friends. In her book, Goodall makes a point about how only humans are capable of deliberate cruelty.

Through Goodall’s studies, she realized that chimpanzees can grieve their losses, and have a sense of family as well. While Pom’s mother was weak and old, she cared for her, and, after her mother’s death, Pom, a female, became increasingly solitary. Like humans, chimpanzees feel pain if family members die. Pom stayed away for weeks on end while she grieved. She noted that baby chimpanzees that had traumatizing childhoods without loving mothers showed different traits and behaviors in adulthood, showing that chimpanzees can store physical memories in their mind.

Goodall also found that chimpanzees not only care for themselves but also show compassion towards each other. They understand when other chimpanzees are stressed, or in pain. For example, when his mate was upset, “Evered reassured her, grooming her until she relaxed” (102). Goodall realized that chimpanzees can not only show sympathy to their family, but also to chimpanzees outside of the family.

Before Goodall’s studies, many scientists believed that only humans were able to use tools. She saw chimpanzees creating and using tools in ways that were very human-like. For example, a chimp created a tool to access a termite mound that was out of sight, showing that he was planning for the future. The importance of this finding is that it showed that chimpanzees have minds similar to those of humans. After Goodall told a scientist named Louis Leakey that chimpanzees were using tools without her teaching them, he responded by saying, “Now we must redefine tool, redefine Man, or accept chimpanzees as humans”. Goodall notes that a significant way that humans differ from chimpanzees is our use of a sophisticated spoken language.

Check out Through a Window: My Thirty Years with the Chimpanzees of Gombe at the Newport Beach Public Library.