If Beale Street Could Talk By: James Baldwin 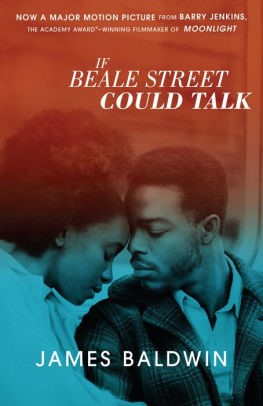 In If Beale Street Could Talk, author James Baldwin pains a heartbreaking story revolving around the lives of a young couple, Tish and Fonny. Baldwin wastes no time in revealing the main conflict for the story, as the opening scene is of Tish visiting Fonny in prison. On the bright side, readers learn that the Tish is pregnant and that Fonny is innocent for the crime of which he was convicted. But the story’s not as simple as it should be. While Fonny is innocent, he also is poor and black - enough to keep him in jail for a false rape charge.

After informing Fonny of the good news, it’s time for Tish to share her pregnancy with her family. Tish’s family is overjoyed and supportive, and they call over Fonny’s family to celebrate. What should be a happy celebration is turned upside down when Baldwin depicts just how broken Fonny’s family is. While Fonny and his father, Frank, have a great relationship, his heavily religious mother and two sisters cause a great deal of trouble in his life. After a terrible argument, the overly religious side of Fonny’s family storms off, displaying no support for the upcoming baby.

Baldwin uses flashbacks to seamlessly weave context into the story. At this point, he portrays how Tish and Fonny met. Tish and Fonny met as young children on the schoolyard, kind of like your classic love story - except they met each other when Tish slammed a nail into Fonny’s cheek. Over time, the animosity that caused the fight turned into forgiveness, and that forgiveness became an inseparable friendship. Another flashback depicts the scene of Fonny’s proposal of marriage, where afterwards he has to convince Tish’s father to accept the marriage. By bringing these scenes from the past into the present, Baldwin is able to show just how strong the love between Tish and Fonny actually is.

Back in the present, Tish is burdened with getting her innocent fiance out of jail. She meets with a lawyer, Mr. Hayward, who describes just how difficult the process will be. Despite the fact that Fonny wasn’t even present at the scene of the rape which he has been jailed for, a racist cop is using his power to keep Fonny in jail. Baldwin then flashes back to how Tish and Fonny got on the bad side of this cop, Officer Bell. While shopping for groceries, Tish was approached by a creepy old man who tried to make moves on her. When Fonny returned from an errand which he was running, he immediately demolishes the pervert. When Officer Bell notices the comotion, he comes over, but straight for Fonny. He attempts to take Fonny into custody, but the grocer and other witnesses at the scene are able to defend him. However from this point on, Bell despised Fonny. This led to his accusation that he saw Fonny running from the crime scene and him convincing the rape victim to choose Fonny out of a line of suspects.

The story follows Tish and her family through their continuing efforts to get Fonny out. Fonny’s bail is finally set, but at an astronomically high price. Frank is discouraged by this, and combined with him recently being fired from his job, is driven to commit suicide. When at the darkest moments, Tish and her family grief about Frank’s death, the baby arrives and Tish’s time has come.

The main theme found within this book is racism. Whether it be the overall story of Fonny’s conviction, or the smaller side story of when Fonny’s friend Daniel was jailed, racism is the driving reason. Baldwin, being an African American man himself, knew personally what it was like to be taken advantage of by police and other racists. By depicting his own unjust story, Baldwin is able to bring more attention to the millions of African American’s daily struggle living within a country filled with hate.

Compared to many, this book is rather hard to place a number on. From the perspective of a reader seeking a fun, enjoyable novel - this book fails that test. But that’s not what Baldwin created this piece for, and it’s not what the piece should be judged for. Instead, a fair rating can only be given depending on the impact it personally had on the reader. Based on the amount of times If Beale Street Could Talk left me stunned, or the amount of times it opened my personal perspective of the world, I can only rate the masterpiece as a 10/10.

Check out If Beale Street Could Talk at the Newport Beach Public Library.