The Boy in the Striped Pajamas by John Boyne 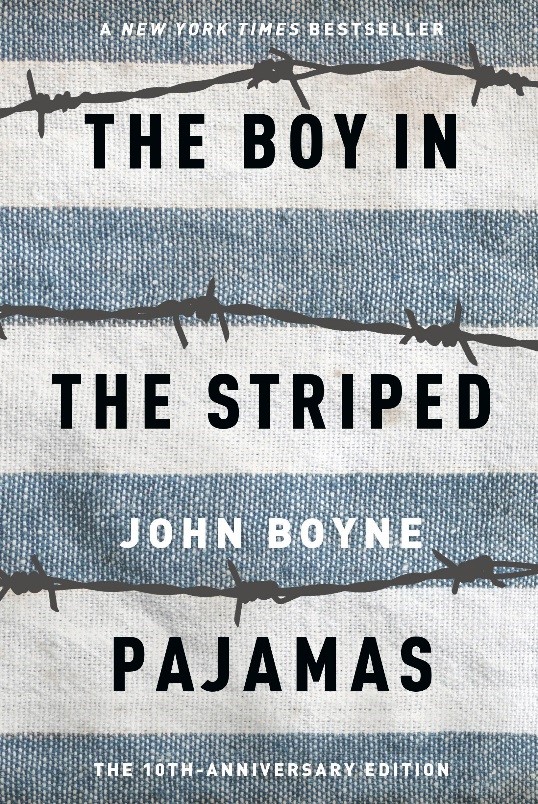 In the years after Bruno moved, he’d never expected that his only friend was the person on the other side of the fence.

A saddening, depressing story filled with childhood memories is what inspired John Boyne to write The Boy in the Striped Pajamas. Beckoning a tale of naivety and uncertainty, The Boy in the Striped Pajamas tells the story of a young boy named Bruno, whose family moves to an area next to a concentration camp in order to get closer to his father’s workplace. Bruno’s father is a Nazi official who is close to Hitler, which makes him ideal for running a death camp in the middle of newly-conquered Poland. While living in the new house, Bruno meets Shmuel, a young Jew that lives trapped inside the concentration camp. After meeting up and having conversations for months, Shmuel decided that it was time for him and Bruno to find Shmuel ‘s father (who is already dead, but Bruno doesn’t know this). After wandering in the camp, Bruno and Shmuel are taken into the gas chamber, along with many other Jews. The book ends with both Bruno and Shmuel dying, and Bruno’s family are left heartbroken and sobbing.

I like the characterization that Boyne uses on each character (specifically Shmuel), because it reveals what emotions are lying inside of the facade of each character, and makes it more exciting to see their reactions when put in certain situations. I also liked that Boyne did not give any of the side characters more presence than Bruno and Shmuel’s plot line (the main plot line), because doing that would undermine the main plot and generate a completely new conflict.

One thing that I dislike is that Boyne does not put enough emphasis on Shmuel’s character, but rather reveals his personal history slowly through the plot points of the book. Although I personally don’t like random flashbacks in a book, I do enjoy flashbacks that add relevance to the scene currently taking place. To be more specific, Boyne gives clues to piece together what happened to Shmuel and his family, only occasionally revealing a certain flashback once in a while, which is not that enjoyable to read in my opinion. Another thing that I want to point out is that Bruno’s curiosity in the book makes some scenes highly unnecessary, such as when the Fuhrer visits Bruno’s house. These scenes in the book showcase useless information that holds no significance in the plot, and I would rather not have the scenes in the book as it interferes with the plot line significantly.

Overall, I would still recommend the book to any young adults who want to experience the difference between persecuted Jews and well-kept Germans during the time of the Holocaust. I still think that this book is a very realistic (although somewhat indirect) depiction of the Holocaust, it taught me a lot about the role Jews had in German society during World War II. The book also offers insight and life lessons during the epilogue, which also makes it very enticing to read.

Check out The Boy in the Striped Pajamas at the Newport Beach Public Library.