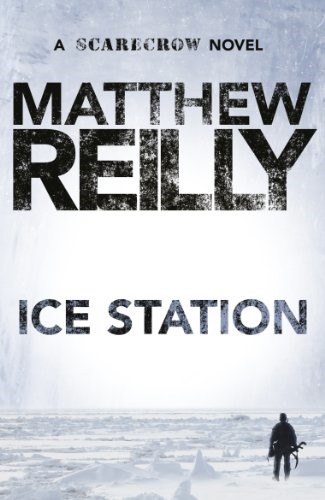 With the alien ship under Wilkes Ice Station being targeted by many countries for research, Schofield and his team of SEALs find that there is no limit to danger in the barren land of Antarctica.

A techno-thriller novel that strikes the brain of any military geek, Ice Station by Matthew Reilly is one of the best action novels in the 21st century. The story starts with a diving team, descending into the deep ice caverns to find ice cores. They stumble upon the “alien ship” , a futuristic looking stealth jet, moments before they are killed by mutated seals living in the cavern.

The station sends out a distress signal, which is supposedly picked up by the French military. Several French scientists arrive, along with a team of Navy SEALs, led by Shane “Scarecrow” Schofield, who are sent by the US government. After more French scientists arrive, the 2 sides are passive with each other, but shortly after, the French scientists reveal themselves as soldiers, and the ensuing fight kills 3 of Schofield’s men, and injures 2 SEALs on the team. Schofield and his team win the fight, but they pick up a signal saying that the French were sending a supposed “warship” to invade the station.

Schofield sends a diving team to investigate where the earlier diving team was sent, and they find the alien ship, which is actually a new innovative spy jet invented by scientists who were trapped below Wilkes Ice Station. Later, one of the injured soldiers, Samurai, is found strangled, and Schofield is shot and left unconscious.

Schofield wakes up in the room of James Renshaw, a scientist who was accused of killing another scientist at Wilkes. It is revealed that Renshaw had been making several movements around the station, going so far as to mounting security cameras in a multitude of places and digging escape routes around the station. Renshaw also testifies to the murder, and proves that the scientist he was accused of killing had committed suicide under the influence of a powerful chemical.

Renshaw removed the bullet from Schofield’s back, and reveals his attacker to be Snake, the sniper in Schofield’s crew. After capturing and interrogating Snake, Schofield and Renshaw find out that Snake is a member of the ICG, an assassination clique secretly operated by the US government to take out other Navy SEALs in search of resources or valuable items. They then learn of an impending SAS attack (led by Trevor Barnaby, Schofield’s idol), and Schofield leaves Snake and the French behind as they leave the station.

In the turn of events that happens in the wake of the attack, Schofield escapes with Rebound (route maker and planner for Schofield’s team) and Renshaw, and together they destroy the aforementioned French warship (which is actually a fully equipped submarine). When the SAS reaches the station they capture Book, one of Schofield’s men, and Kirsty, Sarah Hensleigh’s stepdaughter. Book is fed to a pod of killer whales, and Kirsty escapes, with 2 of the French scientists being killed in the process. Schofield then returns to the base, and manages to kill all of the SAS members and Snake (who was kept alive by the SAS for interrogation purposes). He finds and rescues Kirsty, then searches for Barnaby, who is on his way to claiming the spy ship for himself.

Meanwhile, Hensleigh, who is with the diving team, reveals herself to be an ICG agent, but is killed by a wounded Lindsey Gant, one of Schofield’s closest friends, who is also on the diving team. Montana (also an ICG member) kills off Santa Cruz, but Montana is killed shortly after by the mutated seals in the ice mine.  Schofield, Gant, Renshaw, and Kirsty escape on the spy plane, and land on the USS Wasp, and are taken to Hawaii. Schofield and the others safely make it, but shortly after, another ICG member on Hawaii attacks. Schofield is then saved by Andrew Trent, the man who was thought to be killed by the ICG but escaped and changed his identity.

I like many things about this book, but the several plot twists is what makes the book incredibly interesting to read. As you can see in the summary above, this book is jam-packed with surprising and daring plot-twists that really shock you as you keep reading. Another thing I like is the scene depiction that Reilly uses to describe what is happening in the scene, because it makes the scene feel several times more intense and thrilling than it already is.

One thing that I would say I dislike is the emphasis on gore. Reilly puts much emphasis on when a character is being eaten alive or tortured to death. It distracts from the main plot line and I don’t really get why it needs to be included.

Overall, I give the book a 9/10, because the gore isn’t a big problem and I really enjoyed reading the book for its diverse plot and tone. This book also has a sequel, titled Area 7, which I will be reviewing soon as well, but I think that most young adults will remember the first book in the series as a powerful, dramatic, and solid start.

Check out Ice Station at the Newport Beach Public Library.