The Sky in the Deep By: Adrienne Young 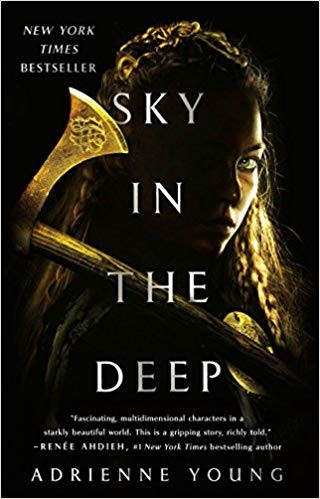 This book is a fantasy fiction genre and is also a variation of the Romeo and Juliet type of romance. The book takes place in a geologically possible setting on Earth and tells of the conflict between two existing tribes practicing the old Nordic religion.Eelyn is a teenager in one of the existing tribes by the Fjord which is the area near the sea, the Aska. Their patron god is called Sigr and their entire society revolves around pleasing Sigr for good fortune and is focused on bringing honor to their god through their continuous battles with the other existing tribe who lived up in the mountain, the Riki. Her whole life she was trained to not hesitate to kill the Riki. Legend has it that when the god, Thora (god of fire), rose up to send fire towards the people of the Aska tribe, Sigr (god of water) rose from the seas to fend Thora off. All her life, she has gone to battle with her partner, Myra, dismembering and slaughtering Riki left and right. The death of her brother, Iri, only spurs her forward with the drive to kill more, to avenge his death. As a child, she had remembered looking at the bloody gash in her brother as he fell to his death. Her brother was always someone she looked up to and was her go-to companion. So as a result, when Eelyn goes to battle and is at the mercy of an opposing Riki, Fiske, close to death, she is shocked to recognize her brother ordering the Riki tribesman to stop. Coming face to face with her brother, she is utterly shocked to see him live in the flesh touching her, the same brother she watched tumble over a cliff, a deep gash in his side.

In the battle, the next day, Eelyn begins to have a different purpose as she goes to war: to look for her brother and find out the truth about his death. As she finds her brother fighting on the opposite side, she flinches to see him kill his own people. As she goes to confront him, she forgets that she is on the opposite side, and his brother can no longer pretend that this interaction had never happened as another Riki catches sight of this. Forced to attack Eelyn who is the enemy, Fiske, Iri’s friend knocks Eelyn and captures her, sparing her life instead of killing her for Iri’s sake who still loves Eelyn as family. As a captive, Eelyn is brought to the Riki village and is forced to work as a servant there for Fiske’s family who has adopted Iri into their family. Repulsed by Iri’s betrayal, Eelyn distances herself from the family.

However overtime, she realizes over the course of time that the Riki are really not that different from the Aska. Realizing that they were ultimately still just people who were fighting for their own god, Thora, Eelyn slowly warms her heart up to her family who do everything to keep her secret safe as Iri’s sister. One night, the village is attacked by the Herja who are a band of inhumane raiders who come not just for possession but also to kill. After fending the raiders off and recuperating from damages, Eelyn takes a Herja captive and learns that the Herja have attacked Riki and Aska villages before them. She realizes that vast in numbers, the only way to defeat the Herja was to join forces with the Aska to fend them off. However this means reconciling and sweeping away the differences like a broom to dust.

This story overall was a pretty good book in my opinion. However I feel like the book spent the majority of the book leading up to the climax only to have it be so short and so unfulfilling. In addition I felt like the conclusion could have been elaborated more. But I feel like this book really deserved at least an 8/10 because we were able to sympathize with the main character in and out, leading us on a thrilling emotional journey. As a result, overall I would still recommend this book which was still written well.

Check out The Sky in the Deep at the Newport Beach Public Library.