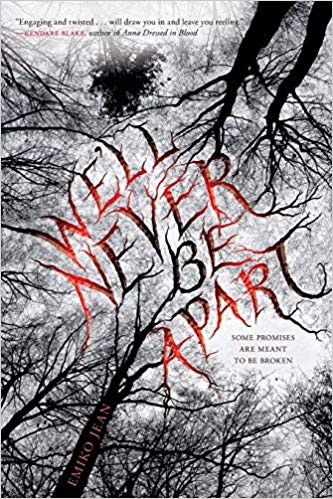 We’ll Never Be Apart by Emiko Jean is a psychological thriller that loops you in until the very end. Seventeen-year-old Alice Monroe is locked in at a mental ward in Savage Isle. She is a victim of a fire that killed her boyfriend, Jason- a fire that her twin sister, Cellie, started. But after meeting Chase, another patient at Savage Isle, she begins to hatch a plan for revenge. In her journal, she writes out her past and puts together her puzzle pieces that tell the full story.

Cellie and Alice used to be inseparable. They were twins and had grown up together. They were patients at Savage Isle together. After Jason came to the ward, however, Alice’s attention slowly shifted from Cellie to him. Cellie felt betrayed as an abandoned third wheel, and one night, she followed Jason and Alice, who had escaped from the facilities, to a deserted, old barn. Cellie found a gas lamp, lit it, and unhesitatingly dropped it on the ground. The barn immediately set on fire, and Cellie watched as Alice and Jason struggled to escape. The police soon arrived, and Cellie, hidden in the shadows, watched as paramedics frantically tried to perform CPR on Alice. The story then shifts to Alice’s perspective. Upon arrival at the ward after recovering, Alice befriends her roommate Amelia and later meets Chase in her therapist’s office. He talks about the “firestarters” being back, and Alice determines from this that Cellie is at Savage Isle with her. She also starts to write about her past in a journal at her therapist’s request.

Alice finds Chase during lunch and asks him to help her find Cellie. At Savage Isle, there are four different types of wards. The A and B wards are voluntary and house low-risk patients. The C ward is involuntary for high-risk patients who pose a risk to themselves and others around them. Alice is currently in Savage Isle as a C ward patient. Since Cellie couldn’t possibly be in the A or B ward, Alice determines that Cellie is at D ward, completely involuntary and locked down. Chase agrees and later somehow manages to steal a key card for entry into the D ward. Though the first attempt to break in is a failure, Alice vows to keep trying and eventually find Cellie. The plot slowly progresses, and with the help of her journal’s hidden truths, Alice finds out that there is more to the story than what she sees.

I thoroughly enjoyed reading this book as a person deeply interested in psychology. Right away, the prologue with Cellie lighting Alice and Jason on fire pulled me in. I liked how throughout the book, the storyline shifted between Alice’s current perspective and the entries in her journal. Alice’s journal is entirely about her troubled past with Cellie, and because the perspective shifted from one to another, it was very compelling to learn about her past in small doses rather than dumping it onto the reader all at once. I also enjoyed learning about the structure of mental wards in a narrative form, and it helped me understand the treatments they use and the types of patients who are housed there. What I disliked were some of the “filler” parts of the story that didn’t seem necessary. Alice signing a plea bargain did help to involve some of the background characters and their relationship with Alice, but overall did nothing to further the development of the plot in a meaningful way.

Overall, I’d give this novel an 8/10. I’d highly recommend it for teens that are interested in psychology and enjoy suspense all throughout the reading.