The Mystery of Black Hollow Lane by Julia Nobel 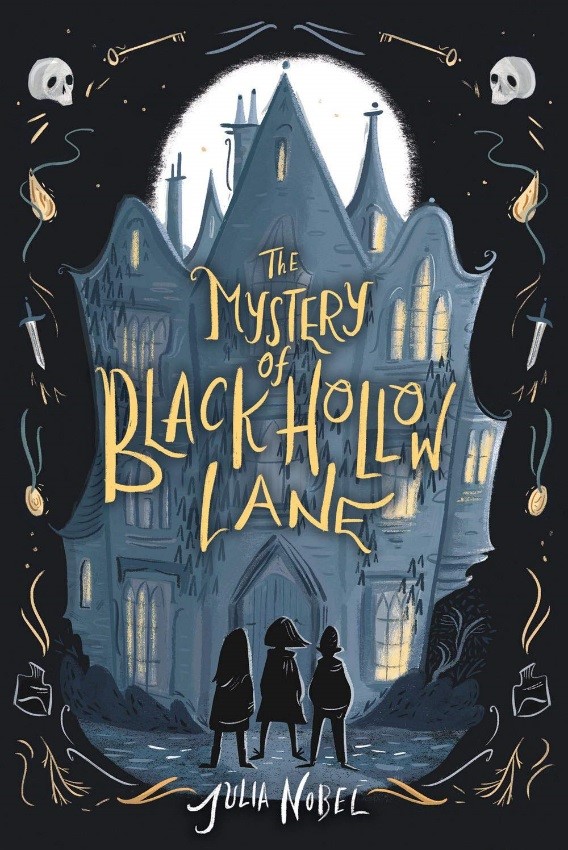 movies and books pertaining to the topic. One book that I read revolving around a dangerous

secret society is “The Mystery of Black Hollow Lane”, by Julia Nobel. In the interesting novel,

readers are introduced to a secret society called the “Order of Black Hollow Lane”, and the

society exists around the world but its headquarters are at Wellsoworth Boarding School, in

interested in mystery and a book about a secret society quite frankly stood out to me. As soon as I started reading the book, I became interested in the main character, Emmy, and how she has been living without her father for the last twelve years. Strangely enough, her mother has

destroyed everything related to Emmy’s father, which leads Emmy to believe that her mother is

father, since he disappeared when she was only three years old, except for his name, Thomas

Allyn. One day, out of curiosity, Emmy goes to the attic when her mother is asleep. While there,

Emmy finds a box containing “relics”, with a note from her father stating that Emmy must keep

them safe and trust no one.

At this point in the story, I admired how direct the author was when catching my attention. Some parts of the book that were fun to read were when Emmy won the game for her Wellsworth soccer team with her best friend, Lola, and when Emmy faced off against Jonas in the Order’s underground tunnels after opening the secret entrance with the relics. Other parts that were not so interesting to read about were the parts about the Latin Society and its secrets.

One character that stood out to me was Lola. I really liked Lola because of her fierceness and

ambition. In the novel, Lola is portrayed as athletic, ambitious, defensive, persistent, and

inclusive. In fact, when Emmy was new to Wellsworth, Lola quickly became friends with her

and made Emmy feel at home at Wellsworth. Lola also persuaded Emmy to join the soccer team and made her experience at the boarding school even better. Additionally, I liked reading about how Emmy’s and Lola’s bond grew as I continued in the book. One character that I did not like reading about was Brynn. Brynn bullied Emmy a lot in the book and even took the letter she got from her father, exposing it to the leader of the Order. It was also later revealed that Brynn was most likely the person that left Emmy’s room a complete mess in the search for the relics.

stand up for themselves, such as Emmy. This is shown when Lola defended Emmy and Brynn

could not stand his ground against her because in the previous year, Lola punched Brynn in the

face and broke his nose because of something he did to another one of Lola’s friends. Brynn was obviously scared about getting humiliated again and left the girls alone.

In terms of the book, I felt like the suspense is a major part of the book that will keep readers

Hollow Lane” is the right book for you. Unlike other books relating to the topic of secret

societies, this book is very realistic and I could definitely see a “society” like The Order existing.

Overall, I would give “The Mystery of Black Hollow Lane” a 5/5 stars because the novel was an

recommend it to anyone looking for something good, yet not too long, to read during this time of uncertainty.

Checkout The Mystery of Black Hollow Lane at the Newport Beach Public Library.