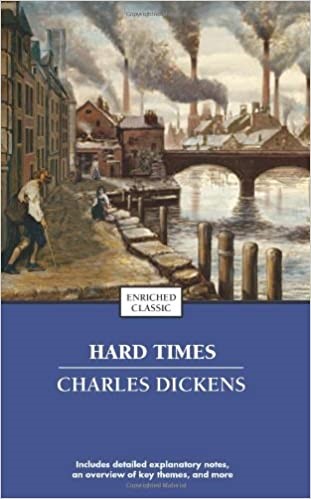 Hard Times is a book written by Charles Dickens mocking the way of life, beliefs and economic conditions of the Victorian Age in England. The book was written in segments, and published periodically in a newspaper in 1854.  When published as a novel, it consists of three books:  Book the First, “Sowing;”  Book the Second, “Reaping;” and Book the Third, “Garnering”.

The novel begins in a school setting, where a main character and the founder of the school, Mr. Gradgrind, is informing the school teacher that he should teach nothing but facts. Dickens emphasizes that Mr. Gradgrind is extremely centered around the philosophy that everything must be about facts, and that emotions should never be considered. The teacher’s name is Mr. M’Choakumchild, an example of the unique names Dickens often gives to his characters, and the name is fitting at a school that discourages children from thinking creatively and tells them never to wonder.  Mr. Gradgrind’s oldest children, Louisa and Tom, attend the school and are important characters.

The novel takes place in Coketown, England.   In Coketown, there are factories everywhere,  and the factory workers are referred to as “Hands.”  The Hands are compared to machines and their life is monotonous.  Nobody besides the rich have a good life.  During the Victorian Age, many followed the political philosophy of self-interest put forth by Adam Smith and Thomas Malthus.  These were two political economists during Dickens’ time who believed everyone should act in their own self-interest.  They believed if you’re poor, then it is your fault.   People were discouraged from giving to charity, and the poor were left to lead miserable lives and die.  Dickens makes this clear as Mr. Gradgrind’s philosophy of fact-based self-interest at the beginning of the novel is reflected in the names of two of his younger sons:  Adam Smith and Malthus.  Mr. Gradgrind raises his children according to this “system” of facts only.  Gradgrind takes in a student from his school, Sissy Jupe, after her circus-performer father leaves town, but as a condition, says she can never speak to her circus friends again.

As the Gradgrind children grow older, Louisa struggles as she feels something is missing from her life.  She eventually marries Josiah Bounderby, the much older factory owner who is a friend of her dad’s.  She doesn’t love him, but doesn’t really know love and happiness because of her emotionless, fact-only upbringing.  Bounderby is wealthy and leads a very comfortable life, but treats his workers poorly.

In another story line, one of the “Hands,” Stephen Blackpool, works at Bounderby’s factory.  He is in love with another factory worker, but is married to a drunken woman who leaves for years at a time.  Stephen asks Bounderby about getting a divorce, but Bounderby tells him that the laws are only for the rich and that he should accept his miserable fate.

At a turning point in the book, Louisa comes home miserable.  Mr. Gradgrind’s realizes that his system of raising his children with facts only was very flawed.  He sees how much happier his younger children are, who are being cared for by the imaginative, loving Sissy Jupe.  The change in Mr. Gradgrind is clearly seen as he goes through massive changes to his ideas and objectives in life.

I would rate Hard Times an 8 out of 10 because it is a well written book, but it has barely any   action.   However, Hard Times was interesting to read, due to the social commentary about Victorian England and how everything slowly started connecting together throughout the book and you see the bigger picture at the end.   Overall, I believe this novel is a good book to read if you are looking for a good story that is fairly relaxing to read.