The Harp and the Ravenvine by Ted Sanders 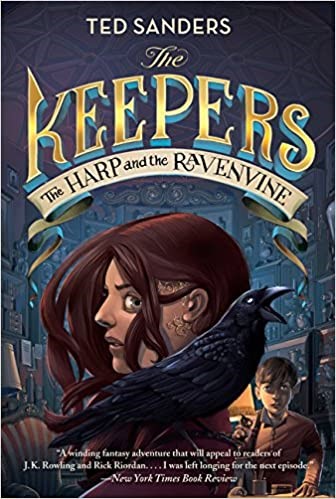 Keepers. It introduces a newfound Keeper named April Simon, who finds herself following the

call of the missing piece of her instrument to the House of Answers, accompanied by her raven,

one. The characters, for example, remain as engaging as ever. The Harp and the Ravenvine

introduces several new faces to the cast, all of whom were great. April’s caring nature was really

nice to read, and I appreciated her sense of empathy. Joshua’s fairly amusing as well, with his

intense love of geography and fairly simplistic way of looking at things. And of course, Isabel is

wonderfully complicated, fiery and stubborn with a dangerous ability that she can’t fully control,

however much she denies it. Together they make a pretty interesting group, and their

interactions with one another can be pretty fun too. I liked watching Joshua trying to teach

Arthur to speak, and April telling him about the animals she sensed nearby. It also has a variety

of perspectives compared to the first book, which was told almost entirely from Horace’s point of

view. It was nice to be able to see events of the story from multiple different angles.


The magic continues to be amazing as well, with the new characters bringing new instruments

and powers to the table. April’s instrument allows her to look into the minds of animals and feel

what they’re feeling, which is pretty cool, and matches well with her empathetic nature. We meet

instruments. And Isabel’s ability and the circumstances behind her getting it were some of my

favorite parts of the book. I loved learning more of the history behind the instruments, and how

they came to be. We get introduced to the concept of Tuners, or people who can manipulate the

bond between Keepers and their instruments, and their addition made the story much more

interesting. And the things we previously knew don’t get left behind, either. Horace’s

improvements with the Box of Promises in this book are certainly noteworthy, as he takes a

significant step forward to having fully mastered his instrument.


Overall, I would rate The Harp and the Ravenvine a 8.5/10. It takes all of the things that I

enjoyed about the first book and expands upon them, making it even better. The new characters

are fun and interesting, and the returning cast is as great as ever. Things get more complicated

them work the way they do. Having the story told from multiple points of view kept things

interesting and served the plot well. And the various reveals complicated the story in ways that

left me feeling excited to continue forward. I’d recommend this to anyone who likes middle-grade fantasy.