The Beautiful and the Damned by F. Scott Fitzgerald 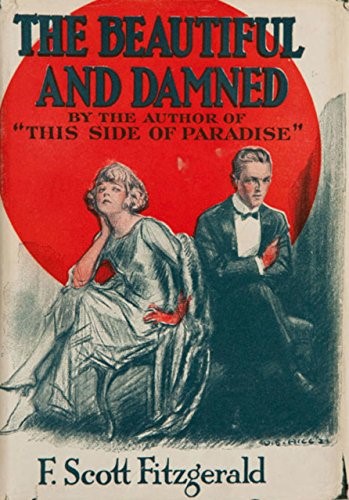 There are a lot of book reviews that (rightfully) sing praise for a book, emphasizing how good it is and giving you yet another book to add to your stack of books to read.  This is not one of them.

The Beautiful and Damned is a three part book by F. Scott Fitzgerald following the relationship of socialite and heir to a fortune, Anthony Patch, as well as the beautiful socialite Gloria Gilbert.  It centers on Anthony Patch, with the first part focusing on how he and Gloria meet and fall in love.  As the novel progresses, the rose-colored goggles of a new relationship lose their tint and expose the glaring flaws in both of their characters that lead to a variety of conflicts in their marriage.  Anthony is vastly unambitious, unwilling to and filling the void of vacation with parties and alcohols.  He is complacent in knowing that he will receive a fortune in the future, and when that doesn’t happen, his and Gloria’s life extravagant lifestyle comes crashing down.  Gloria, on the other hand, is defined by her beauty which is essentially treated like her only personality trait throughout the entire novel.


I think the reason why, regarding any book, you may see more positive reviews than negative is simply because the people who hate the book don’t bother finishing it.  When this book entered Part II, I started questioning why I was still reading this.  But, I subjected myself to torture so that I knew I had all of the details — and possible redemptions — before writing a review as scathing as this.


I shall begin with the positives.  As always, Fitzgerald writes with the utmost eloquence.  The way he writes descriptions of characters and locations always has such a poetic air about it.  I just wish the things he was writing about weren’t so insipid.  Here’s a phrase I quite liked: “... she gave back forgotten dreams.”  I thought that was quite pretty by itself, could be used in a romance novel or such and such.  But, here is the full line (edited a bit for briefness): “Noon would come [...] and the doors of the Ritz would revolve, the crowd would divide, fifty masculine eyes would start, stare, as she gave back forgotten dreams to the husbands of many obese and comic women.”


I suppose one of the few ways someone could actually enjoy this novel is in understanding its message.  Like in The Great Gatsby, Fitzgerald writes about flawed relationships and characters in order to highlight their wrongdoings and the things that lead to their demise.  I will say that I read The Great Gatsby recently and I didn’t particularly enjoy any of the characters, but still saw the beauty in the way that Fitzgerald portrayed the collapse of the American Dream and paralleled it with the collapse of the Roaring 20’s.  In contrast, no amount of eloquence or meaning could save this book from its characters, unlikable from the start; awkward scenes; and painful dialogue.


My face physically contracted while reading some of the interactions between Gloria and Anthony.  At one point, Gloria decides to go try to become a movie actress, because her one trait is beauty and Anthony is not contributing much to their financial situation himself.  This dialogue ensues: [Gloria] “Oh, you make me tired.  Do you imagine I have a very thrilling time dozing on this damn porch?” [Anthony] “You wouldn’t mind if you loved me.”


There is also the painfully awkward scene entitled “Nietzschean Incident.”  Here is a line from it: “In his mind was but one idea-that Gloria was being selfish, that she was always being selfish and would continue to be unless here and now he asserted himself as her master.”  I do not feel the need to say any more.


This is a more minor point, but there is one Japanese character in the novel.  Fitzgerald is not exactly known for his diverse cast of characters, so I was not expecting too much.  But, Tana (the Japanese character) was just so unnecessary, to say the least.  I listened to some chapters on audiobook, not being able to withstand reading the words with my own two eyes, and every single line of Tana’s dialogue was broken up by stutters and an accent and a lack of adequate vocabulary.  I know it’s a bit presentist; maybe Fitzgerald was thinking he was exposing how the rich exploited Asian people back in the day.  But, did he really have to add one Asian character and make him and his broken speech comic relief?


If you could not tell, I despised this novel and would not want to subject this pain upon anybody else, so read it at your own risk.  I felt that Fitzgerald attempted to document flaws in the relationships and general society of the upper echelon, but fell short in execution and just made it uncomfortable.  Perhaps part of my dislike can be attributed to how much I enjoyed The Great Gatsby and set relatively high expectations for this novel.  I could see how it would be well received in different times, though, and I think a good description of it would be “did not age well.”  Overall, I would give it a 3/10 and also a warning about how uncomfortable it can be to sit through.  If anyone does decide to see this trainwreck firsthand and read The Beautiful and the Damned themself, I hope you find more enjoyment in it than I do.

Checkout The Beautiful and the Damned from the Newport Beach Public Library.