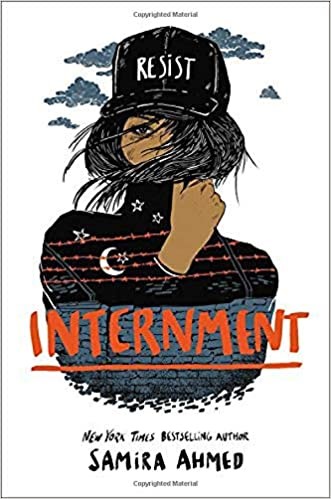 Internment is a book about a dystopian version of the United States. In this book, Fascists and Nazis have taken over the government, and they are persecuting Muslim-Americans. This takes place in modern-day, and the government has essentially become corrupt. These Muslim-Americans have slowly received fewer and fewer rights, and they are starting to be treated like the Japanese-Americans during World War II. They are being shunned, ostracised, and persecuted. We follow 17-year-old Layla Amin as she struggles with being discriminated against. Then, she and a lot of the other Muslim-Americans living in L.A. are put into an internment camp by Manzanar called “Camp Mobius”. Throughout the novel, we follow her as she adjusts to the harsh reality that she is essentially living in a prison. We also see her make friends in the camp. The important plot of the book is her drive to get out of the camp. Luckily, she has a friend outside the camp, and her new friends inside the camp take action to stand up to the injustice of being imprisoned. However, the ruthless Islamophobes are everywhere, and it seems like an impossible task. Will Layla be able to get out of the camp alive, or will Islamophobia prevail?

This book was very good. Layla’s character was very powerful. She always stood up for what is right, even if it meant putting herself in danger. Also, I found that the whole concept of a modern internment camp was really well thought out. It seemed so realistic, and I could easily picture the situation. The internment camp used modern technology like drones to make it seem like it could happen today. Also, there were references to modern movies, like Star Wars’ “Rogue One”. This book also gave a different perspective to islamophobia, showing how bigotry can negatively affect people from the perspective of the marginalized group. Overall, the story really made me feel like I could empathize with Layla, and I thoroughly enjoyed reading it. Also, the book was written in a very smart way. I liked how the author referenced parts of the Muslim religion and Layla’s Desi (Indian) culture in the book. It enabled readers to learn more about the Muslim religion while also enjoying themselves as this book keeps the readers entertained. I found it to be a solid mix of culture and story so that neither aspect of the book seemed forced.

I really liked this book. It feels very timely, as we know that Islamophobia is a prevalent issue in today's world. I thought that it addressed the issue very clearly, and The author subtly indicated how the events in the novel are very similar to some of the stuff that has been happening in recent years. I also really thought that the author painted a very good picture of what it would be like to be forced into an internment camp and have to leave everything behind. I truly could picture the internment camp, and I thought that this made the story much more compelling.

I would rate this book a 9/10. I found that the message was good, and I really liked how the author made all of the characters seem relatable. However, some of the plans that they cooked up to break out of the camp seemed a little crazy and implausible. Other than that, I would highly recommend this book, because I found it a poignant and relevant novel in today's world.