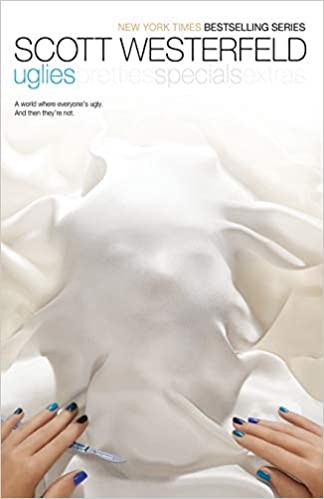 In Scott Westerfield’s Uglies, the first book in a quadrilogy, we enter a world hundreds of years

after the demise of the world we know today. Like any utopian society they have special ways of

keeping order. In this particular situation everyone becomes Pretty when they turn sixteen.

Becoming Pretty in an operation that makes everyone look and act like the ideal person. Since

The story begins with Tally sneaking out to go visit her best friend Peris in New Pretty Town.

Peris is a couple of months older than Tally so he turned pretty before Tally. Tally easily gets

pretty to see him. As she's leaving some guards are going into the house where she's at so she

has to jump from the top, with a hover jacket that will save her, but it’s still a risky move. She

jumps off the top freaking everyone out since they can’t see her jacket. Once she gets to the

bottom she runs off and hides in the bushes.


There in the bushes Shay is also hiding. Shay had just snuck over to watch the pretties but had

to hide once guards got word about Tally. Tally and Shay sneak back into Uglyville together.

pretty on the same day. They hung out alot and snuck out into the rusty ruins almost every

doesn’t want to be pretty and that she’s running away to go live in the Smoke, a place where

uglies run away to when they don’t want to become pretty. Tally doesn’t want to go with her so

her to Special Circumstances, the city's government where everyone there is a scary kind of

pretty. There Tally is told that they’ve been trying to track down the Smoke and take everyone

back to their cities. They ask Tally if she knows how to get there. She tells them about the note

but she herself can barely read it. They give her an ultimatum either go to the Smoke and set off


After a lot of consideration Tally decides to go to the Smoke so she can become pretty. She

takes a long and hard journey there. When she finally arrives she starts to get used to the

Smoke and their way of life. One night David, the son of the starters of the Smoke, takes Tally

to see his parents. There they tell her that the operation doesn’t just make them pretty but they

also implant lesions in their brains to make them less violent and not think things over too much.

They do this so none starts overthinking their society.


Tally decides she doesn’t want to set off the tracker so she throws it in a fire, little did she know

that set it off anyway. The next day Special Circumstances had already riled everyone up and

was ready to send them back to their cities. She and David are the only two to escape and they

have to go save their friends.


They get to their friends and find out that Shay had already been turned pretty. They get

everyone out and start to establish a new Smoke. Their only problem now is getting the lesions

out of Shays brain. David’s mom has a cure but Shay won’t take it. Tally decides to give herself

up to Special Circumstances and become pretty to prove to Shay that it works.


This book was a really good book. It was an interesting way of running a society. Westerfield

really opened up a whole new importance on having certain traits. He also gives us insight on

how important and unimportant appearances really are.


There were a few things that weren’t needed. Peris made sense in the beginning but as the

book progressed his story line wasn’t necessary. I also feel that there were a lot of things that

still didn’t make much sense about their utopian society at the end of the book.

Overall the book was really interesting and engaging. I give this book a 8/10 and recommend it