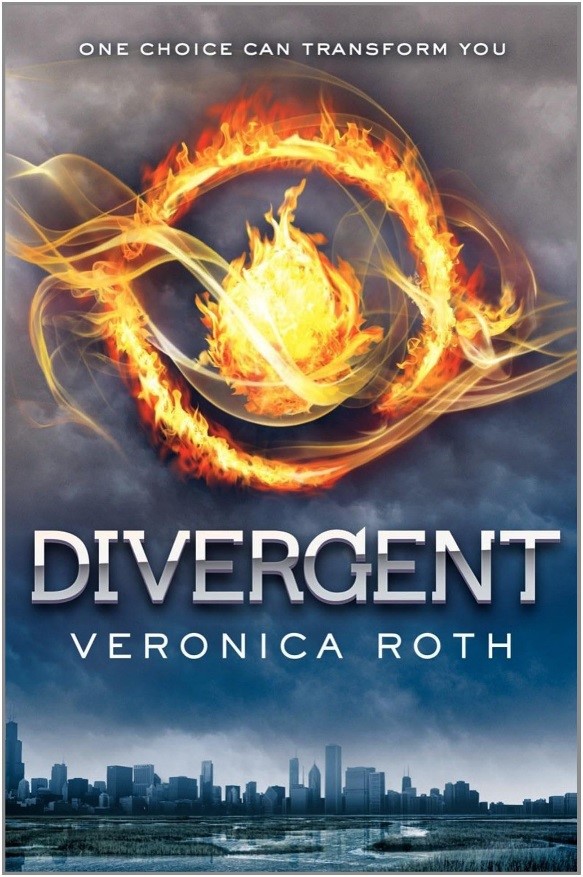 factions Abnegation, Candor, Amity, Dauntless, and Erudite. It follows Beatrice Prior, a sixteen

switch to another faction.


The book starts with Beatrice getting her haircut by her mother. She is worried about her

aptitude test. The test tells her what faction she should choose. After the test she will choose

which faction she wants to go to. She wants to join Dauntless, the faction about bravery. She

doesn’t know what to do. She takes her aptitude test, which is a simulation where her choices

throughout determine what faction is best. When she is done her test administrator tells her that

she is Divergent. This means that she is compatible for multiple factions. The administrator says

not to tell anyone ever. At dinner Beatrice had to hide her conflicted feelings.


At the choosing ceremony Beatrice’s brother chooses Erudite. With some hesitation she

chooses Dauntless. She jumps on a train and meets Christina and Will. A boy named Peter

makes fun of her for being Abnegation. To show him up she jumps into the Pit, first. The Pit is

how newcomers get into the Dauntless headquarters. The next day Eric, the lead trainer, tells

the initiates that there are three stages to the training process. If they pass each stage then they

become Dauntless, if they don’t they become factionless.

Abnegation. She does well during the first day of training, shooting guns at targets. The next

day is hand to hand combat. When Christiana concedes her opponent Eric makes her hang

over a chasm in the Pit for five minutes as punishment. Tris has to go against Peter, he beats

her badly and she ends up in the infirmary. She starts doubting her choice. Late that night Eric

and Four, another trainer, take them to play a game of capture the flag. Tris and Four climb a

ferris wheel to see where the other teams flag is. Tris starts having feelings for Four. She is able

to figure out where the flag is and leads them to victory. The next day they have to practice knife

have come from Dauntless. Later the rankings from stage one are revealed and Tris places

sixth. Edward, who placed first, is stabbed in the eye. Tris suspects that Peter, who placed

second, did it out of jealousy.

how fast the initiates can get through them. Tris does really well and is able to finish her

simulation very fast. Four realizes she is Divergent and tells her not to tell anyone. She goes to

talk to Tori, her aptitude test administrator, about being Divergent. Tori tells Tris that her brother

was killed when the government found out that he was Divergent. Since she can manipulate the

simulations she ranks first for stage two. Peter gets mad and attacks her one night with the help

of two other initiates, Drew and Al. They almost drop her over the chasm until Four shows up

and rescues her. He takes her back to his room to recover and they become closer. Al is so

upset with himself about what he did that he jumps into the chasm. While venting to Four about

Dauntless priorities he tells her that she is being watched.


The third stage is going into a simulation filled with each person’s worst fears. Four takes Tris

into his own simulation of his fears. There she learns that his name is four because he only has

four fears and that his real name is Tobias Eaton. He is Marcus Eaton’s son, Marcus works with

Tris’s dad. Marcus was accused of beating Tobias and after seeing his fear simulation Tris knew

it was true. After the simulation Tris and Tobias kiss. The next day Tobias ignores Tris making

her upset. During the practice simulation Tris panics. Tobias rebukes her and she slaps him.

She runs away going to visit her brother in Erudite. He shows loyalty to Erudite which angers

Tris since they keep accruing Abnegation horrible things. She is taken by two men to Jeanine,

Erudite leader, and she interrogates Tris about her simulation results. Tris has to lie and cover


When she gets back to Dauntless Eric threatens Tris with punishment for leaving. Tobias says

she was just heartbroken because he rejected her. Later he takes her into the city and shows

her that Erudite lights are still on, a major violation. He tells her that he found out that Erudite

was planning a war against Abnegation but isn’t sure how Dauntless is involved.

so she has to think like a Dauntless not a Divergent. Eric congratulates her for doing so well and

informs everyone that a tracking device has to be injected in them. She is suspicious but goes

along with it. Later she realizes the tracker devices are going to be used to control the

Dauntless. She isn’t able to tell Tobias in time and that night she wakes up and sees everyone

in a trance. She is Divergent so the serum didn’t work on her but she just follows everyone.

well. When they get to Abnegation the Dauntless start shooting everyone in sight. Tris stops

Eric from shooting Tobias and they are both taken to Jeanine, who tells them her plot to take

over the government. Tobias is injected with a serum that makes him attack Tris and she is


She wakes up in a glass box filling with water like in her simulation. Her mom comes in and

saves her and shortly after their escape her mom is shot. Tris finds her father and brother hiding

with other Abnegation members, along with Marcus. They go to Dauntless headquarters to get

to the control room. Tris convinces Peter to help them get into the room. On their way there

Tris’s dad is also shot. When she gets to the control room Tobias is still under the influence of

the serum. They fight and before he shoots her she talks him out of the serum. He stops the

commuter program and takes the hard drive. They meet up with Marcus and Caleb, Tris’s

brother, on a train to Amity. Tris notices Marcus is Marcus is interested in the harddrive and

wonders what will happen next.


Roth’s storyline was very original and intriguing. This book was really interesting and had a lot of

unexpected turns to the plot. The characters were great and the plot was great. When I was

done I couldn’t wait to see what happened next.


One thing I didn’t like was Tris’s brother. They never explained why he chose Erudite and what

his role in the war was. He helps them fight against them but it’s never clear what he did while

the war was being planned. I wish that had been cleared up more.


Overall it was an exciting book filled with action and adventure. I give this book a 9/10 for its

incredible characters and plot. I would recommend this book to anyone looking for a good