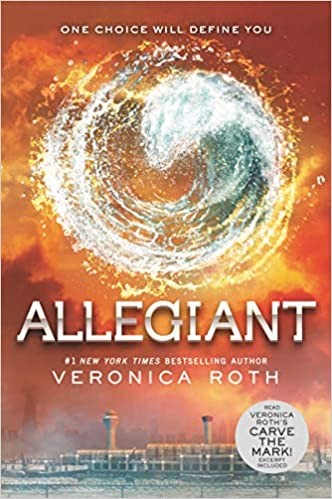 Veronica Roth’s Allegiant is the third and final book of the Divergent series, a story about

Chicago in the future. It is split into five factions Amity, Candor, Dauntless, Erudite, and

Abnegation. In the last two books Erudite was trying to overthrow all the other factions so that

their leader, Jeanine, could rule all. They were also trying to kill all who are Divergent, people

who are unacceptable to brain manipulation. They were unsuccessful and Jeanine was killed.

and that she was going to join the experiment. This lady we found out was Tris’s mom. Tris is

the main character whose perspective the story is told from. Tobias’s perspective is also used in

the third book; he is Tris’s love interest.


The book opens with Tris being imprisoned for her crimes in the last book. She tried to save the

life of Jeanine to get the video but it was seen as treason. Meanwhile Tobias is contemplating

leaving the city or staying loyal to his mother and helping her run the new government. Tris lies

and is able to get out of prison.


Chaos breaks out in the city and riots cause the death of others. Tobias realizes it's his mother's

fault for not giving people a choice to become factionless or not. After the riots a rebel group,

the Allegiants, approaches Tris and tells her that they want to help her and her friends escape

the city. It is difficult but they are able to escape.

for the group responsible for founding the city. Amar is Tobias’s former trainer who he thought

was dead. They take them back to the Bureau of Genetic Welfare headquarters to meet their


He explains that they come from the failed United States Government. The former government

failed because they tried to experiment on people and get rid of bad traits. Not everyone agreed

with this and a civil war broke out. After the war was over the genetically damaged survivors

were put into cities to create genetically healed humans, Divergent. The Bureau has been

studying these cities. As everybody is taking in all this information Tris is given documents about

her mother. Her mother’s jeans were nearly perfect. Tobias and Tris have their jeans tested, Tris tests as Divergent but Tobias doesn’t. Tobias is hurt by this by Tris reassures him that she still sees him as the same person.


David takes Tris outside the Bureau, meanwhile Tobias is taken, by Nita, to where the

genetically damaged humans are and find out that they are badly treated. Tobias tells Tris about

what he saw and takes her to go see Nita. Nita wants their help to steal a memory serum that

the Bureau is going to use on all of Chicago. Tobias believes her but Tris doesn’t. Tris is right

and Nita sets off a bomb. She then takes David hostage and uses him as a shield to steal a

death serum. She and Tobias are stopped and put in jail. Tobias soom gets out since he didn’t

memory serum on Chicago. Tobias goes to the city and convinces Evylyn, his mom, to let

everyone free and to form an alliance with Allegiant. While he’s doing that Tris goes to unleash

the memory serum on the Bureau. She is successful but David shoots her before it affects him.

Tobias gets back and is sad about losing Tris. Cristina has to talk him out of taking the memory

serum. In the epilogue, Tobias is still mourning Tris, but is committed to helping others and

books. It was interesting learning more about their society and why they lived the way they did.

The book also explained being Divergent more and gave it more meaning.

There were a lot of things wrong with this book though. Tobias and Tris were really drifting apart

and never agreed on anything. If she hadn’t died I feel they wouldn’t have lasted very long. I

also felt that Tris dying was just to add drama not because it actually fit in with the story. Her


Overall the book wasn’t very good but you have to read it to fill in gaps from the last two books. I

give this book a 5/10 for giving us some more insight on the characters and their society. I