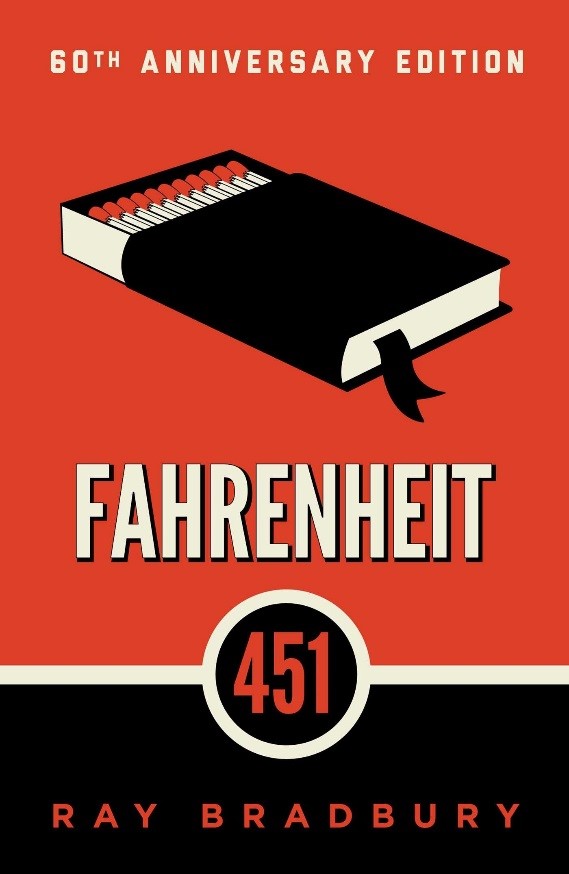 Ray Bradbury’s classic novel, Fahrenheit 452 is a sci-fi, dystopian story that follows the

life of a troubled firefighter named Guy Montag. In the world that we live in, firefighters

provide a feeling of security and relief as they put out fires. But in the world that

Bradbury created, firefighters strike fear into the citizens because their sole job is to

the pages turn to black embers. Then each day, he returns home to his wife Mildred

into their mundane but familiar routine. But a series of strange and shocking events

cause Montag to question what his life has become.

questions that float in his mind. She asks him if he is happy, and he is taken back. Why? Why would he not be happy? Is he happy? Then, he comes home and finds his wife Mildred lying so still and silent with an empty bottle of capsules lying next to her. He finds the phone in a panic and calls the paramedics. They show up with annoyance that the number of cases is rising so steadily. With carelessness and detachment, they pump her blood through a machine to clean it out. Then as soon as they came, they were gone, leaving Montag and his wife alone. The next morning, Mildred seemed to have no memory of her attempted suicide and the events of the night before.

Even stranger in his mind is the woman with the books. It was just another call, a

woman had been found with a large collection of books. But this woman was different.

She declared that she would rather die with the pages then give them up to the flames.

As he watches the old woman being engulfed in the heartless flames, for the first time

he feels something else in his heart. No more could he be satisfied burning the books

with such shallow interest when no questions were answered about why.

As time passes, Montag finds the world around him increasingly unsatisfied. He grows

more and more curious with questions that require uncomfortable or challenging

answers. The relationships in his life are mysterious. Mildred spends her days more

absorbed in a fake world than with him or anything else. And knowledge is fed to the

people through screens and media. Death matters to no one, it passes through their lips

The book poses challenging questions for the readers. Would you sacrifice freedom,

learning, and questions for ease, shallow comfort, and answers that avoid the truth? No

matter what your personal, political, or religious beliefs are, this novel will make you

In the world of Fahrenheit 451, happiness is the only emotion that is accepted. Books

are burned to take away longing thoughts of past times, and education and

entertainment are controlled. Simple freedoms are taken from individuals to provide

shallow comfort and ease. Throughout this book, we are taken along with Montag on a

painful and psychological journey that ends in an epic conclusion. It is easy to get

caught up in the anxiety, fear and panic that surround the story. Questions will arise. If

you are looking for a dystopian novel with burning questions, challenging topics, and unforgettable characters, then I highly recommend this classic novel.