Keeper of the Lost Cities Series by Shannon Messenger 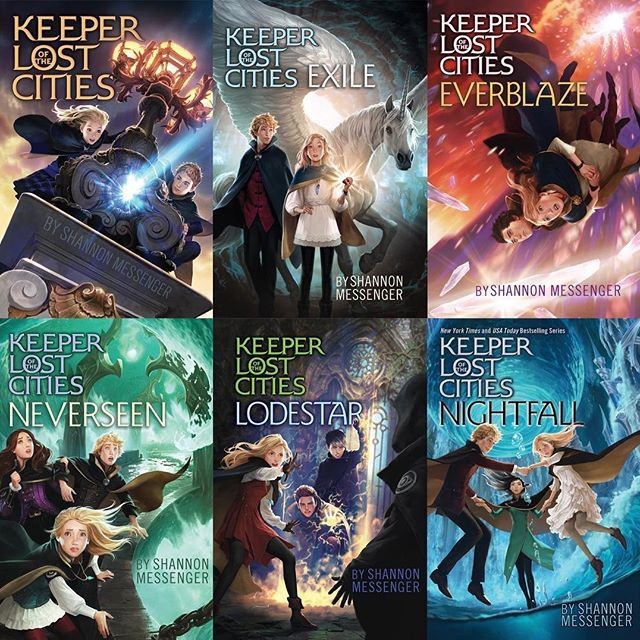 The Keeper of the Lost Cities series by Shannon Messenger is one of my favorite book series ever. The way it combines adventure, humor, magic, and romance into a fantastic story constantly amazes me. As of November 5th, 2020, there are eight books in the series, but book 8.5 comes out on November 17th! The titles of all the books in the series are Keeper of the Lost Cities, Exile, Everblaze, Neverseen, Lodestar, Nightfall, Flashback, Legacy, and Unlocked is coming out soon. I love that the story of Sophie Foster and her friends never grows old, and Shannon Messenger always finds creative new ways to add new plots and people into the books. I would recommend this to anyone who liked Harry Potter by J.K. Rowling or The Unwanteds by Lisa McMann.


In the beginning of the book, Sophie Foster is just a normal twelve year old kid. Who happens to be a child prodigy and high school senior. And can read minds. She tries to blend in, but it’s hard to with a reputation like hers. One day, while she’s on a field trip, Sophie finds someone like her. Fitz Vacker can also read minds, and tells Sophie a shocking truth. Sophie isn’t human. She’s an elf, and she needs to come to The Lost Cities to live with the rest of the elves. But soon, Sophie finds that there’s something different about her. Something some people would kill for.


This book is so interesting to read, and I love how different the characters can be. You might expect all the characters to be too perfect, and excel at everything and be overall amazing. But they all have their flaws, too. Fitz can be overprotective at times, and Keefe’s smiles mask a troubled past. Biana can be bossy, and Dex gets jealous easily. But despite these flaws, all of Sophie’s friends are extremely loveable, and I always get excited to read more about them. I’m also a big fan of the bit of romance Shannon Messenger presents with such ease. It doesn’t take over, but is definitely there, a little nagging voice in the back of Sophie’s head. We see that Sophie has a crush on Fitz from the start, but Dex is also very likable. When she met Keefe, I realized that this was going to turn into some evolved form of a love triangle, like a love square! To this day, I’m still wondering who will win!


I understand that some people enjoy fast-paced books with lots of action, but I can’t exactly promise you that with the first Keeper of the Lost Cities book. A lot of it is just Sophie going to classes and learning more about her past and the elven world, which is actually quite interesting. She’s also simultaneously investigating a group called The Black Swan and figuring out what they are planning for the elves and the humans. Of course, there is some action and suspense throughout the book, and the other books in the series involve a little more fighting and a little less school work.


This fantasy series is a great young adult read, and it is usually the first book I recommend to anyone. There’s a cliffhanger ending in almost every book, so you’re going to want to read them all back-to-back! I can barely manage to wait a whole year for each book in this magnificent series to come out, and I scramble to the store the day the book is released. I

hope you love Keeper of the Lost Cities as much as I do!

Checkout the Keeper of the Lost Cities from the Newport Beach Public Library.