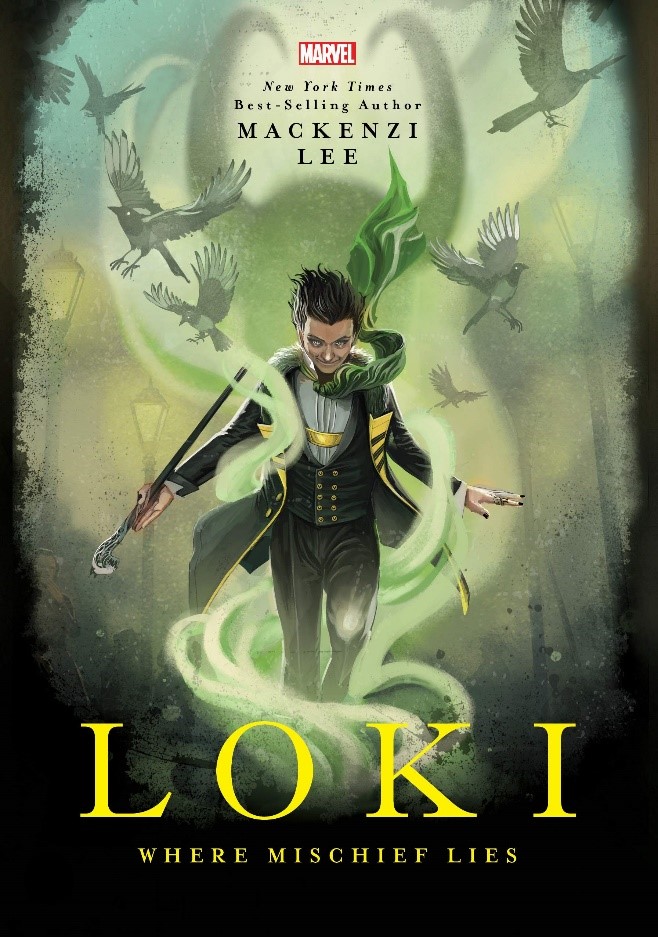 Most of us know who Thor is. He is the legendary Marvel character, the blond Asgardian “god of thunder” and a member of the beloved superhero team called The Avengers. But hidden within his brother’s shadow, lies Loki, the mischievous adopted brother who longs for everything that he cannot reach. Loki could be anything, he already was inferior, he already was the trickster, but inside of him, is the power of magic. He could be a witch.

Loki: Where Mischief Lies is the 2019 YA novel written by Mackenzi Lee. It explores the life of Loki before we knew him as the “jealous, younger brother” of a hero. The story starts by introducing the kingdom of Asgard and the tension between the opposite brothers. Loki wants to be appreciated, he wants to make his father, Odin, proud. But everything that he does cannot compare to his “golden” older brother. Thor has everything that the future king of Asgard is supposed to have. Muscle, blonde hair, outgoing personality, strength, and a trustworthy attitude. Loki, on the other hand, has magical powers, black hair, a small frame, and a trickster mentality. Everyone in the kingdom assumes that Thor will take the throne following as their father’s successor.

The main plot starts when Odin (the kind of Asgard and the father of Thor and Loki) looks into the godseye mirror for guidance and uses it as a portal to view the future. The ceremony is cut abruptly short when Odin is shocked to see that one of his sons will lead an army in revolt against Asgard. Loki, who is in attendance with his closest friend and sorceress Amora, questions if it would be him. He is tormented. He would never do that. Or would he? Loki tries to read his father to see which son is the disappointment. But he can find no answers, no telltale signs of anger in his father’s eyes. But the curiosity is soon too much to bear. So with Amora’s help, the pair break into the vault where the godseye mirror is stored. Unfortunately, all goes wrong when their untrained and underdeveloped magic breaks free from their control and shatters the mirror. Not only does this prove their recklessness, but the pair’s lives are almost taken. Odin is extremely angered and disappointed and he banishes both Amora and Loki from the kingdom of Asgard.

Loki is sent to Earth, to investigate a strange series of murders that show traces of Asgardian magic. He joins forces with the SHARP Society led by Mrs. Sharp and meets Theo, one of the members. Loki is soon put into the strange world of nineteenth-century London to investigate the mysterious and alarming crimes. During the course of the novel, Loki has to question everything from the people surrounding him, the clues that he finds and the trouble brewing inside of him. I really enjoyed this novel. It explored darker situations and themes that were in Loki’s past. The imagery and world created was suspenseful and dark, but also magical and thrilling. Everything that Marvel put into Loki’s backstory, Mackenzi Lee pulled out and twisted it into a complex character.

The cover art is stunning, and it represents Loki’s character well. Loki’s struggle with his powers and his conflicted desire to be “good” and heroic isn’t exactly relatable, but I was able to feel empathy and attachment to him throughout the book. Another mentionable element that I liked was the humor. The humor of the author is well suited for Loki, all of the interactions between Thor and Loki provide a breath of fresh air and an escape from the dark, bitter tone of the story.

Overall the book is well written, with a few flaws. I feel that this novel could have easily added 100 pages to flesh out more of the London mystery elements, and the backstories of the characters could have been explored. Even though London seems to be the “main setting,” he isn’t sent there until around the middle of this 400 page novel. This is the first of Marvel YA novels that Mackenzi Lee is set to write. Hopefully the character is explored in his fullness and every dark complication that he faces.

If you are looking to learn more about Loki, or just craving an entertaining, dark, twisted read, you are in the right place. I found the emotional parts of the story gripping and satisfying, as well as the dialogue and the humor. 8/10

Checkout the ebook Loki: Where Mischief Lies from the Newport Beach Public Library.