Their Eyes Were Watching God by Zora Neale Hurston 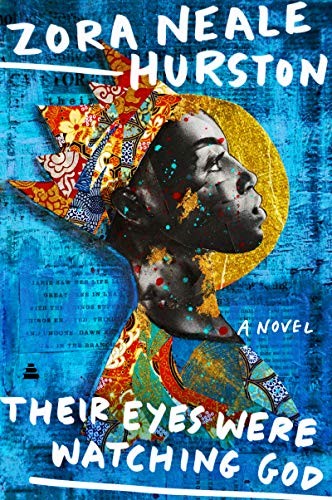 Their Eyes Were Watching God (1937) is a novel by Zora Neale Hurston that tells the story of an African-American woman named Janie in the early twentieth century.  The novel is structured a bit like a circle; it is a frame narrative, with both the first and last chapters including Janie telling her life story to her friend, Pheoby.  Janie describes her upbringing; she was raised by her grandmother, Nanny, who was a former slave.  In her teenage years, Janie begins awaken to love.  Nanny arranges a marriage for her, and Janie ends up sorely disappointed when she and the man do not magically fall in love.  She eventually ends up running away with another man, Joe Starks, and the two move to the all-black community of Eatonville, Florida, where Joe becomes mayor.  The two are married for around twenty years, but Joe eventually dies and Janie is on her own for, perhaps, the first time in her life.  Janie eventually falls back in love with a man named Tea Cake, and the two move to a new town and live a fairly happy life together (there are still some major imperfections, but Janie is happier than she was before) until Tea Cake also dies.  Right before the final chapter, Janie describes her journey back to Eatonville and we are caught up to the very moment when she tells Pheoby her story.

There is some incredible writing in this novel.  I believe all of the dialogue is written in vernacular, so the words are written out how they are pronounced.  It took me a bit to get the hang of reading it, but it really enhances the story and helped me immerse myself fully into the setting.  But, besides that, there is many beautiful metaphors and images throughout this story that help describe the heights of Janie’s emotions and thoughts.  For example, the horizon is repeatedly referenced as a symbol of Janie’s own hopes and dreams, and throughout the novel, you can see how she grows and her relationship with it changes.

One of my favorite things was the way Hurston concluded the novel.  Considering that this book contains a frame narrative (it is mentioned that Tea Cake is dead in the first chapter), it’s a bit hard to spoil.  But, I will reference her state of mind in the final chapter and a few details regarding how she ends up there.  So, skip the next two paragraphs if you don’t want to read that.

Seeing a young, naive Janie marry Logan Killicks in the beginning and her assuming they’ll automatically fall in love, my first thought was, “Oh, okay.  This is going to be one of those novels where it turns out the greatest love comes from yourself” (a message that I find has become cliched over the years, much like the whole “the true treasure is the friends we made along the way” thing).  So I waited and waited through her relationship with Joe and Tea Cake for her to come to that revelation, either through being subjected to Joe’s abuse or the sudden feeling of liberation when she left Eatonville with Tea Cake.  But… she never exactly did.  The novel ends with her still loving Tea Cake (or at least remembering him in his brightest state) and mourning him, though she has clearly grown from every experience.  I think it could be argued that, after the novel ends, she will no longer seek love not because she doesn’t need anyone’s love other than her own, but rather because she feels fulfilled with the experiences of her life.

I guess it was the fault of my own bad assumption, but I was really glad to see the novel end that way.  I suppose that I was so cynical because I find that those self-love narratives often end up portraying women as needing to be fixed (i.e. needing to experience a man’s love in order to figure out that they need one to live a fulfilling life).  In addition, I feel that some media has capitalized on the “love yourself” narrative and convoluted it to the point where the message feels tacky and, if anything, backwards in its purpose.

Anyways, I think this is one of my favorite novels I’ve read this year.  I’d recommend it to anyone, but particularly readers who are interested in gender roles and/or how they play out in historical contexts.  Fair warning, though, that the novel sometimes discusses reality in all of its ugliness; there are depictions of racism.  Considering that women got their right to vote in 1920, only 17 years before this novel was published, the way the women in this novel are treated is not always the best or comfortable to witness.  Regardless, these realistic depictions make way for important conversations, and makes this novel even more worth reading.

Checkout Their Eyes Were Watching God from the Newport Beach Public Library.