The Iliad by Homer 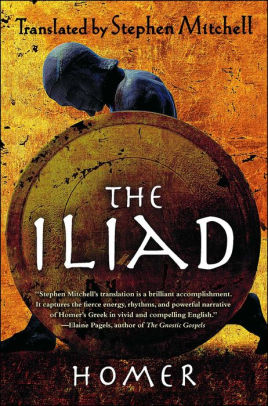 The Iliad is a Greek epic poem by Homer. Written around the 8th century BC, The Iliad recounts the later years of the Trojan War, a ten-year conflict between the Greeks and Trojans.

Homer begins The Iliad with an argument between two of the Greek leaders, Achilles and Agamemnon. Agamemnon, the commander-in-chief of the Greek forces, had taken Chriseis, the daughter of a priest to Apollo, captive, and had refused to return her to her father. Such an action caused Apollo to send pestilence to the Greek army, and many Greeks died. As a result, the Greek commanders, especially Achilles, urge Agamemnon to return Chriseis so that Apollo would stop the plague. Agememonon eventually agrees; however, he asks that in return he takes Briseis, a maiden that Achilles had captured. Achilles, forced to give up Briseis, is dishonored, and refuses to help Agamemnon and the Greeks by fighting in the war any longer. Furthermore, he wishes that the Greeks be destroyed in battle, and asks his mother, Thetis, to ask Zeus to favor the Trojans in the war. Zeus, being the king of the gods, has the ability to determine the outcome of the war, and thus agrees to Thetis’ request.

With Achilles withdrawing himself and his forces from the war, the Greeks lose a significant part of their army. Furthermore, with Zeus intentionally favoring the Trojans, the Greeks suffer defeat after defeat in the battlefield. While previous battles had been fairly even between both sides, the Trojans gain the upper hand and are able to push the Greek army away from the walls of Troy. Even the heroism and bravery of other Greek warriors, such as Ajax, Odysseus, and Diomedes, the Greeks are to no avail. Eventually, the Trojans are able to push back the Greeks all the way back to their ships, and a Greek defeat seems imminent. Especially with many Greek commanders wounded, Agamemnon and his army are in a desperate position.

Recognizing their dire situation, but still unwilling to fight for them, Achilles agrees to provide some help to the Greeks by letting his good friend Patroclus lead his forces into battle. Furthermore, he allows Patroclus to don his armor, giving both the Greeks and Trojans the idea that Achilles himself is joining the battle. This tactic is successful at first, boosting the morale of the Greeks and causing the Trojans to hesitate. However, the Trojans’ greatest warrior, Hector, meets Patroclus in single combat. In the end, Hector, with the help of Apollo, slays Patroclus and takes his armor. With that, the Greek attack fails once again.

When Achilles discovers that his friend Patroclus has been killed by Hector, he is filled with grief and rage. Such emotions convince him to take part in battle the next day. He acquires a new set of armor from his mother, who had persuaded Hephaestus, the god of metalworking, to forge it. Achilles then leads the Greek army once again.

With Achilles unexpectedly rejoining the battle, the Trojan forces are caught off guard. Achilles fights and defeats every Trojan that he comes across. The Greek army gains momentum, pushing the Trojans back all the way to their walls. All the Trojans retreat within the walls, except Hector, who decides to remain behind and face Achilles. Achilles and Hector engage in single combat, and Achilles is able to avenge Patroclus. Homer finally ends his epic with the funerals and celebrations of both Patroclus and Hector.

I thoroughly enjoyed The Iliad. I liked that Homer portrayed the Greek mindset of attaining personal glory through war. Most of the main characters were focused on preserving their reputation and honor. Furthermore, Homer seems to depict characters as either virtuous or dishonorable depending on how competent they were on the battlefield. For example, Achilles and Hector were considered worthy heroes because they were the greatest warriors on each side of the battle field. In contrast, characters like Paris were portrayed as cowardly and weak because they were not active participants in the war. I think that this accurately portrays the Greek idea of the greatest hero.

Overall, I would rate The Iliad a 10/10. The story was action-packed and extremely descriptive, and I enjoyed exploring the different heroes and leaders on both sides of the Trojan War. In addition, Samuel Butler translates the epic in a clear and understandable way. However, the descriptions of the battles were extremely brutal and gory at times. In the end, I would recommend this epic to anyone interested in Classics and Greek mythology.

Check out The Iliad from the Newport Beach Public Library.