The Westing Game by Ellen Raskin 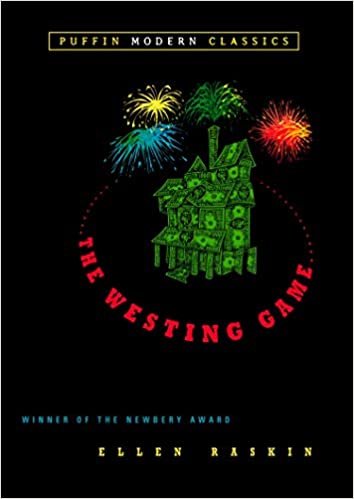 The Westing Game is an exciting, gripping, and surprisingly compelling whodunit about clever yet eccentric millionaire Samuel W. Westing, who has gathered sixteen of his potential heirs to compete in his mysterious game to uncover which of them murdered him.

Spellbinding and convoluted, the gripping mystery of Mr. Westing's death is a must-read for anyone who enjoys a fascinating mystery or even just a good read! Every page holds new and puzzling clues, making the reader feel among the characters trying to solve the mystery.

I've always struggled to find a good mystery novel, mostly because the majority are too straightforward or easy to solve. However, The Westing Game was one of the best murder mystery novels I've ever read! The plot is so clever and well thought out that it seemed impossible to solve. The ending was unexpected, and the red herrings were quite deceiving, even for the reader! There are a wide variety of characters and viewpoints throughout the novel that appear in an unexpected yet extraordinary manner. Something that I particularly enjoyed about The Westing Game were the characters. They were equally complex, brilliant, fascinating, flawed, quirky, and most importantly, unique. Each of the characters were trying to hide their true nature and identity, which meant that it was up to the heirs - and the reader - to discover who each person really was. The author created characters who were from all walks of life, and with seemingly nothing truly in common (except of course for the connection that was slowly revealed). Most of the characters are kind-hearted despite their flaws, although it wasn’t always visible at first.

The themes of The Westing Game are beautiful and deeply profound. One of the most significant themes was morality, and what it truly means to be a good person. After reading the novel, I came to believe that the true reason that Mr. Westing created the game was to bring the families of the heirs together. This may be because of the family troubles that Samuel Westing had to face himself as a child and an adult. Overall, The Westing Game provided countless life lessons for the reader.

The author also did a wonderful job of applying some real-world issues to the novel. For example, one of the characters was disabled. I appreciated the way that the author handled the discrimination the character was subjected to. Ellen Raskin was able to portray that people with disabilities can live a full life and be just as successful despite their hardships through the different characters.

Although the age range is for younger readers, I think younger children might have some trouble understanding the context and the plot. However, The Westing Game is definitely a novel for all ages! I'd rate this novel an 8/10 because of the wonderful messages, gripping mystery, although it was a bit hard to understand at times.

You won’t be able to put down the book until you solve the 200-million-dollar question: who murdered Samuel Westing?

Checkout The Westing Game from the Newport Beach Public Library.