The Outside Shot by Walter Dean Myers 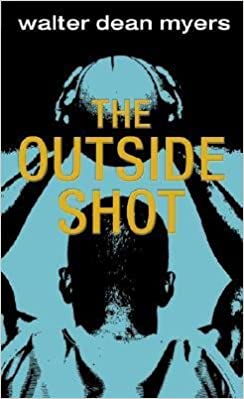 A series of continuous barriers are thrown at a wannabe star. Far from home, Lonnie Jackson chases his big dream of becoming a pro basketball player. While falling in love and getting into trouble, can he accomplish what he started?

Written by Walter Dean Myers, The Outside Shot is a novel about the protagonist’s Lonnie Jackson journey leaving his hometown in Harlem to go to Montclair College in Indiana, a small town compared to his big city home that he is used to. But this path is the only chance he has of playing pro and he knows that to achieve his dreams, he has to be outstanding in every way.

In Harlem, Jackson enjoyed everyday things like playing basketball with his friends and hanging out with them. Spending time with his mom and going to church was also important to him. As Jacksonrealizes that he wouldn't be able to see his hometown for a while, he takes his last looks around the old raggedy town that has been the only home he has known.

When he gets to Indiana, he is an outsider and being the new kid involves enduring some conflicts along the way. Sherry Jewett, a determined trackstar, becomes another obstacle that drives him crazy. Their lives are very different and after having an on-and-off relationship, Jackson is forced to end it. After the breakup, things go downhill as he begins to slack off on his grades. One thing leads to another and soon enough, Jackson gets into a fight with his coach that leads to a couple of game suspensions and gets in trouble with the police while at their local store.

My favorite part of the book is when Jackson decides to focus on his ultimate goal of becoming a professional athlete. Although Sherry is a sweet and good looking girl, she has plans of becoming a professional athlete. Since Sherry is very focused on her dream, she is not really worrying about the relationship. On the other hand, Jackson is head over heels about her and later on she becomes a distraction. Becoming a professional basketball player requires a lot of work and time. For Jackson to step up and end the relationship in spite of his feelings shows others that he would like to pursue his dream as a professional athlete, which is very inspiring to others dealing with similar problems. Despite the hardships Jackson faces, he tries his best to overcome and strive to become a better person and athlete. Jackson also realizes that not everything is going to go his way and his best option is to adapt to the situations that are thrown his way.

Overall, this book was better than most. The Outside Shot had many different obstacles the main character had to overcome to try and become a pro basketball player. The book also relates to others since some athletes who try to make the best out of their unfortunate situation run into many distractions that obstruct them. Personally, I relate to this book as I come from a middle-class family just like how the main character has and I also want to become successful while playing sports. I would rate the book a 4/5 because the book has a good combination of good and bad events.