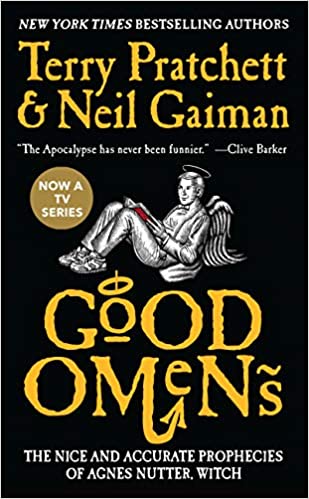 As a true “divine comedy” that is fairly ridiculous and satirical, Good Omens pokes fun at religion, destiny, and the apocalypse in a lighthearted and good-natured fashion. If you like to read books that are funny, witty, and feel like a fever dream, then this is certainly the book for you.

Good Omens primarily follows the lives of Aziraphale and Crowley, an angel and a demon who live on Earth with humans. From the Garden of Eden to the modern era, the reader witnesses their developing friendship through the ages, even as they continue to insist that they are nemesis.  In fact, both of them seem to enjoy living on Earth so much that Crowley loves to drive around in his car with sunglasses, and Aziraphale has opened an antique bookshop. So, when they both get orders relating to the apocalypse- in that Crowley must switch the Antichrist with a human baby and Aziraphale must allow this to occur- they decide to try and prevent it instead. Except, it seems that nobody knows where the actual Antichrist is, because there were three babies in the shell game instead of two. As Atlantis rises, aliens begin to inform humans about the dangers of global warming, and the Four Horsemen ride again (on motorbikes), the Antichrist named Adam must decide for himself what he really wants.

My main criticism of this book is that it follows a lot of characters and storylines at once. All of these characters are pretty relevant and definitely very interesting and funny, but some of them probably could have been cut from the book. However, all of the storylines converge at the end, so the book does a good job of tying up the story nicely. This book also sort of requires the reader to read the footnotes and character index to fully understand what is going on. There isn’t much of a romantic subplot either- there is a lot more worldbuilding and backstory.

What I really love about this book is the comedy- almost every character is pretty hilarious, and the book loves to make fun of fate, destiny, and religion. It also has a lot of good messages about friendship, good and evil, power, and self-fulfilling prophecies. The book’s commentary about climate change and humanity’s faults are also more relevant than ever today, thirty years after it was written. In addition, I love the unique inclusion of prophecies, funny footnotes, and ridiculous stories and details about Aziraphale and Crowley. It’s obvious that the two writers had a blast writing it, and so the reader has fun as well.

This book transcends traditional genres, but I would predict that anyone who enjoys comedy or modern fantasy novels would most likely enjoy it. If you have ever read books by either author before and liked them, I would definitely recommend this collaboration. Anyone who likes books that make them think, or books that are very weird and make you go “how did anyone come up with this?” will also enjoy this book. Overall, I would rate it a solid 9 out of 10, because although it isn’t for everyone I really enjoyed it and I think many others readers will too.

Check out Good Omens from the Newport Beach Public Library.