So B. It by Sarah Weeks 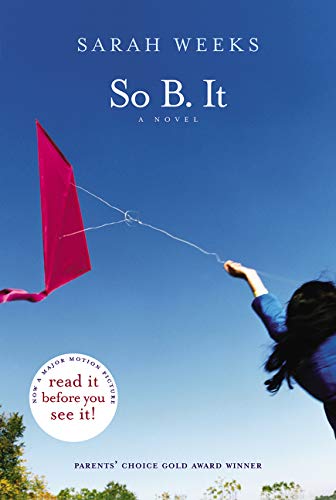 So B. It is a heartwarming and touching novel about a young twelve-year-old girl named Heidi who wants to learn about who she is and where she comes from.

Heidi leads a difficult life with her mother who is not able to say more than a handful of words (23 to be exact) and has a mental disability. Heidi knows nothing of her past since her mother has never been able to answer any of her looming questions. Although her mother has nothing to offer but unconditional love, Heidi feels a constant emptiness for not knowing about her mysterious past. She wonders if she has a father, where she was born, and what brought her and her mother to Reno, Nevada.

She was raised by a loving but agoraphobic neighbor (someone who has a fear of leaving their home), Bernadette, who has cared for Heidi since her infancy. Bernadette had protected Heidi from the outside world, making Heidi completely vulnerable. Of the 23 words that her mother knows, one of the words that Heidi's mother repeatedly says is "Soof". One day, Heidi finds an old photograph of her pregnant mother outside of a building called Hilltop Home. This word and photograph in itself are the driving factor that led Heidi across the country to find out who she is and why "Soof" is so important to her mother.

This novel is so much more than coming of age, family, or mental disabilities. It's about identity and finding out who you are. At first, Heidi wished that she had a normal family, but throughout the novel, she learned to treasure the people who are already there and whom she loves. Through Heidi's story, I've learned what it truly means to be persistent. She discovered that learning the about the lies she was told about her life, Heidi was able to set herself free and learned how to lead a better life. She never gave up and found light even when things seemed dark and hopeless. I think that to be able to keep moving forward and using your past to carve a path for your future takes a lot of courage and determination.

I have read several books that discuss mental disabilities, but So B. It was a novel that haunted me long after I read the last page. Heidi's story is one that you cannot understand the sheer beauty of without reading. The author, Sarah Weeks, did an amazing job at creating such a poignant novel that accurately portrays each character's emotions in a way that brings tears and a wanting to read still the last word.

I would highly recommend So B. It to anyone who wants to read about finding their identity. It is an extremely sensitive and emotional book that even I had a hard time containing my tears towards the end. Because of this, I would not recommend it to any younger readers. However, it is definitely a novel that should be added to your booklist!

Check out So B. It from the Newport Beach Public Library.