The Planning Division has submitted an updated draft of the Western Snowy Plover Management Plan for East Balboa Peninsula Beaches (Plan) to the California Coastal Commission for their review in hopes of obtaining a coastal development permit., City staff have been working with Coastal Commission staff and the U.S. Fish and Wildlife Service to create a plan that balances the need for resource protection and public access. The Western Snowy Plover (WSP) is a federally designated threatened species and the United States Fish and Wildlife Service has designated the beach area between B and G Streets as critical habitat for the WSP. The WSP also inhabit other areas of the Balboa Peninsula east of the critical habit area. The Plan includes provisions for habitat management that takes into account predator management, recreation management, municipal operations in and around the critical habitat, signage, public education, and monitoring to document how the local WSP population is affected by human related activities in the area. A public hearing before the Coastal Commission to consider the project will be noticed and scheduled at a future date.

Follow the links below to view the latest version of the plan.

The Planning Division has submitted the Western Snowy Plover Management Plan for East Balboa Peninsula Beaches (Plan) to the California Coastal Commission for their review.

The Plan includes provisions for habitat management and dune restoration that takes into account, predator management, recreation management, municipal operations in and around the critical habitat, signage and public education. Finally, and most importantly, the Plan includes procedures for habitat monitoring and an adaptive management component that allows the Plan to modified and adjusted to changing habitat and WSP population conditions observed through the monitoring.

Implementation of the Plan requires approval of a Coastal Development Permit. City staff will now wait to hear Coastal Commission staff regarding any suggested changes before advancing the Plan to a public hearing before the Coastal Commission.

To access the plan and related documents use the links below:

About the Western Snowy Plover 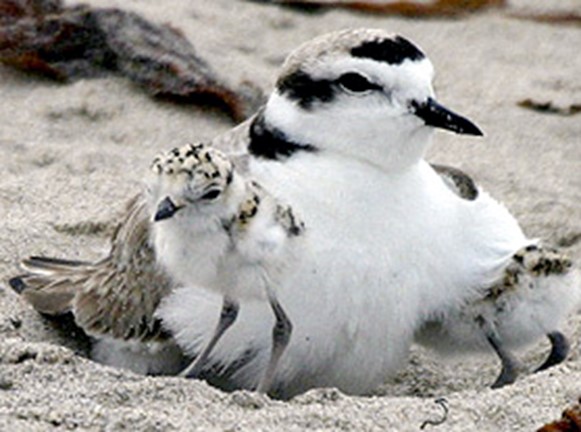 The Western Snowy Plover (Plover) is a small shorebird that can be found along the Pacific Coast from Baja California to Washington. Since 1993, the Plover has been listed as a “threatened” species and is federally protected under the Endangered Species Act (ESA). A population of Plover’s live on the Balboa Peninsula, between B Street and the Wedge (a distance of over one mile), for a majority of the year.  Under the ESA, the area between B Street to G Street, is designated a “critical habitat” area by the U.S. Fish and Wildlife Service (USFWS). Critical habitat “is a term in the ESA that identifies geographic areas containing features essential for the conservation of a threatened or endangered species, and which may require special management considerations or protection” (USFWS).  Management and protection of the critical habitat area is an important part of the USFWS’s recovery plan that aims to increase the Plover’s population and meet specific criteria to one day remove them from the endangered species list.

The City initiated management of the area in 2009. These efforts included monitoring the designated critical habitat area and installing fencing between D and E Streets in 2010 and installing additional fencing between E and F Streets in 2017. Fencing helps to delineate and recognize the critical habitat area to help minimize and protect the area from pets, human activities and vehicle use.

The average daily sighting of Plovers over the past seven seasons shows a pattern that the Plover’s population has grown, in average, since 2009. Over the last few years (2015 and 2016), there has been a slight drop in the population. Staff believes this is partly due to the limited ability to monitor the area as often as we had previously. Staff continues to monitor the area.

The City held an open house on September 14, 2017 at Marina Park to provide information and gather community input to assist us in the development of a Western Snowy Plover Critical Habitat Management Plan. Approximately 65 to 75 community members attended.

Representatives from various City departments (Police, Fire & Lifeguards, Community Development, Recreation and Municipal Operations), as well as environmental biologists and representatives from the U.S. Fish and Wildlife Service and the California Coastal Commission, were present to answer questions and gather community input. An informational packet was distributed at the open house.

The City is in the process of evaluating alternative methods to ensure the management efforts are effective in protecting the Plovers. Alternative methods being considered for habitat protection include modification of the fence structure, additional or improved signage, heighten enforcement of the leash law, and improved coordination with the City’s maintenance and lifeguard divisions to ensure equipment does not access the area. The City has also retained a team of biologists with Dudek Environmental Consulting to assist in evaluating the protection measures and to develop a comprehensive management plan for protecting the Plovers in the critical habitat area.

Any modification of the fencing requires approval from the California Coastal Commission.  In June 2017, two applications were submitted, one to immediately remove the newest fence (CDP Application New Fence) and the other to remove the older fence in September after the nesting season (CDP Application Old Fence). The Coastal Commission staff has deemed both applications incomplete (notice of incomplete application) at this time and indicated the need for a management plan for the ongoing protection of the Plovers in the critical habitat area. The plan under development by Dudek will satisfy this requirement and will include the identification of existing resources (including vegetation and sand dune formations), native plant restoration, invasive plant removal, final success criteria, provisions for monitoring, provisions for submission of annual reports of monitoring results, and a project alternative(s) analysis.