What to do Before, During, and After a Storm

The City of Newport Beach and surrounding areas are, like most of 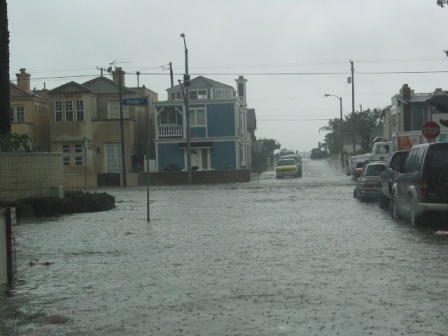 Southern California, subject to unpredictable seasonal rainfall. Most years, the scant winter rains barely turn the hills green for a few weeks, but every few years the region is subjected to periods of intense and sustained precipitation that result in flooding. Flood events that occurred in 1969, 1978, 1980, 1983, 1992, 1995, 1998, and 2005 have caused an increased awareness of the potential for public and private losses as a result of this hazard, particularly in highly urbanized parts of floodplains and alluvial plains. As the population in Southern California increases, there is an increased pressure to build on flood-prone areas, and in areas upstream of already developed areas. With increased development, there is also an increase in impervious surfaces, such as asphalt. Water that used to be absorbed into the ground becomes runoff to downstream areas. If the storm drain systems are not designed or improved to convey these increased flows, areas that may have not flooded in the past may be subject to flooding in the future. This is especially true for developments at the base of the mountains and downstream from canyons that have the potential to convey mudflows.

The City of Newport Beach can be divided into three geographic areas: 1) a low elevation area comprised of West Newport, Balboa Peninsula, and Newport Bay, 2) elevated marine terrace areas that include Newport Heights and Westcliff, and 3) high relief terrain of the San Joaquin Hills in the eastern portion of the City. The low elevation and terrace areas are generally drained by urbanized and relatively low relief streams that empty into Newport Bay. In contrast, rugged natural streams with steeper gradients drain the Newport Ridge and Newport Coast areas.

San Diego Creek is the main tributary to Newport Bay. Its headwaters lie about a mile east of the I-5 - I-405 intersection, at an elevation of about 500 feet. The creek flows westerly from its headwaters and empties into Newport Bay one mile west of the campus of the University of California at Irvine. Portions of San Diego Creek were channelized in 1968 for flood protection purposes.