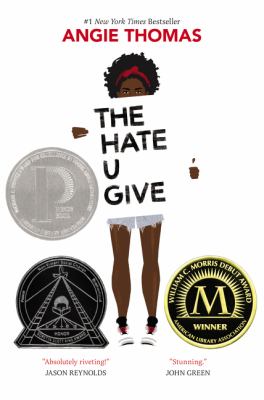 In The Hate U Give, the reader follows a high school girl named Starr. As an African-American going to a nice private school, Starr finds herself caught in two different worlds. One is her world near Starr’s home with local gangs. Starr’s father used to be a leader of a gang. In her other world at school, Starr has a whole different persona to disguise that she is from the “hood”. Because of the predominately white prep school Starr attends, Starr does not want people to associate her with being poor. When Starr is at a party in her neighborhood, she sees Khalil, her oldest childhood friend. After catching up, Starr and Khalil hear gunshots at the party. These shots cause Starr and Khalil to leave the party, and Khalil drives Starr home. A police officer pulls Starr and Khalil over and frisks Khalil. When the police officer goes back to his car to check Khalil’s registration, Khalil leans in through the window to make sure that Starr is ok. When the police officer turns around and sees Khalil, the officer opens fire, killing Khalil instantly. This blatant act of racism affects everything in Starr’s life, from friends to family. Starr has to overcome her personal struggles and speak out about the racial prejudice that killed Khalil. But speaking out can harm everyone close to Starr. Is Starr going to speak up for Khalil, or should she stay quiet to protect her family?

The author, Angie Thomas, wrote this book exquisitely. I liked the style of writing. However, for me the story sometimes got a little hard to follow. The diction in the novel’s dialogue threw me off a little. However, the storyline interested and enthralled me. I really liked the small characters in the story. For example, Hailey, Starr’s racially insensitive “friend”, added a whole substory to the book about how to approach Hailey’s insensitiveness. Hailey’s actions jump-started Starr to stand up for herself and for her beliefs.

The Hate U Give was a great book. However, I think events were improbable. For example, when Starr throws a can of tear gas back at the cops, she somehow makes it out alive, and if the police came after Starr, the author did not include that in the novel. I also think DeVante as a character does not really progress the story. DeVante’s role is minor, and he only serves to inform us that Khalil was not a drug dealer, which could have been put into the story by almost anyone. Finally, after reading Dear Martin, a book addressing the same issue of police brutality and racial injustice, I noticed that there is an archetype that covered both of the books. This archetype made the storyline somewhat repetitive. Overall, the message the book conveyed was powerful and relevant.

I would rate this book a 8 out of 10. I liked the book, but it is a little unrealistic. However, The Hate U Give had a truly touching storyline and a deep theme. Angie Thomas confidently addresses injustices in today’s world and leaves readers with a new perspective. I loved this fantastic book, and everybody should read it, just because of the topic if not for the literature itself. Police brutality is an issue in today’s world, and everybody needs to understand it. Therefore, I think that this book is a must-read.

Check out The Hate U Give at the Newport Beach Public Library.