Show/Hide
All Newport Beach City facilities, including City Hall, will be closed to the public as of Wednesday, March 18, following the executive order from the Orange County Health Care Agency to slow the transmission of COVID-19 (coronavirus). City staff will continue to provide services by phone, email and through the web.

Of Mice and Men by John Steinbeck 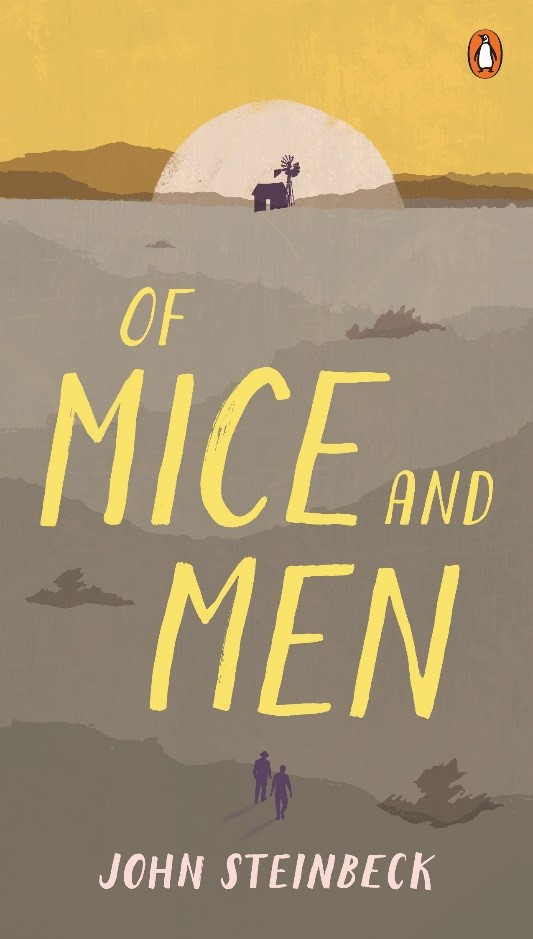 August 1929-March 1933. This was the time period in which the Great Depression occurred. For those who don't know what the Great Depression was, it was a time period in which America's economy “crashed “. It started after the stock market crashed and wiped out millions of investors. At this time period, it was extremely difficult to get a job, and owning a house was a dream that many Americans worked hard to achieve. At this time, the idea of the “American Dream” was fostered. Depending on your living situation, the American Dream varied from owning a house, having a job, and even having a family. During this time period, the book “Of Mice and Men” by John Steinbeck, was written. “Of Mice and Men” details the story of two men, George Milton and Lennie Small, and their journey towards achieving their version of the American Dream.

To start the book off, the readers are provided with a scenery. This part of the story takes place on a hillside by a green and flowing Salinas River. There are trees everywhere and out of the brush comes Geroge and Lennie. George is a tall and skinny man with long yet strong arms. He has deep black eyes and long legs. Lennie is the complete opposite of George. He is tall as well but much more muscular than George. He is described as having the body type resembling a “bear” with massive hands that resemble paws. Although he looks like an animal, his face is very innocent. After the two men come out of the brush, Lennie drops down on his knees and takes long gulps out of the green river, quenching his thirst. George does the same, but takes small sips and takes breaks in between, being cautious about the murky water. After the two get up, they travel to a dirt road. On the way there, the personality of George and his feelings towards Lennie are displayed. He is angry at Lennie because apparently, he is the reason why the duo had to leave their old town and travel to find a new job and start a new life. Readers are also told that the reason the two left is because of Lennie. Lennie is very attracted towards soft things, and will try his best to get his hands on something soft, alive or dead. He did the same thing in the old town when he saw a little girl in a bright red dress. This dress looked very soft, because it was made of velvet, and caught Lennie’s eye. Lennie touched the dress and wouldn’t let go. Soon enough, the little girl could not get Lennie to release his grip, and had to attack him to get away. As she ran away, she repeatedly screamt “Rape!”. The men in the town he became aware of this situation gathered together so they could find Lennie and lynch him because they believed the girl. As a result, George, who is a close friend of Lennie, took the beast and the two fled from the town to save Lennie's life. They had to hide in a gutter for the night, making George irate about the situation and leading him to ponder if he had made a mistake. The next day, the two end up by the river where the story starts. As they are walking down the dirt road, George sees a bus and the two get on it. George became aware of a small town 10 miles south of their current location that gives jobs to people. At this time, George wanted nothing more than to get a job so that him and Lennie could make enough money to buy their own house. While approaching the bus, George spots Lennie holding something in his hand and rubbing it.

George takes the item from Lennie and becomes aware that it is a dead mouse. Lennie explains

pet it. George, who was disgusted, threw the mouse far away where Lennie could not find out.

Lennie became upset but believed that George only wants the best for him. As the two men

approach the bus, it shows no plans of stopping and drives right by the men. George becomes

very angry at the situation and the two men have to walk 10 miles to get to the town. Soon

enough, the duo reaches the town and enter the boss’s home to register as workers. Before

they enter, George tells Lennie to keep his mouth shut once they enter, and Lennie agrees to

the demand. As they enter, they see a short man with glasses sitting at a wooden desk. He asks

why the men were late and George responds by telling the man that they had to walk 10 miles.

When he asks where they are from, George also responds by saying “Salinas”. When the boss

suspicious and asks why George is talking for Lennie. George says that Lennie was hit in the

head when he was younger and that he is not much of a talker, but he is “as strong as a bull”

and a “mighty good worker”. The boss seems to understand a calls a man by the name of

“Candy” to come and take them to their room. Candy walks in and he is a very old man with one

hand. He is accompanied by a dog who is also very old, judging by the way he walks.

Candy takes the two to their small room. As they settle in, a short man with a glove on one hand

names Curley walks in as well. He abruptly and rudely asks the men if they have seen his wife, which they deny. After he picks on Lennie for a little bit, he leaves the room by slamming the door. George immediately grows a feeling of hatred towards Curley, and tells Candy that Curley better stay away from him and Lennie if he doesn’t want to get beat up. Candy informs the two men that Curley’s wife is a “tramp” and that she is always looking for trouble. After hearing this, George tells Lennie to stay away from both Curley and his wife. Lennie obeys George and assures him that he will stay away from the two and will try his best to cause no trouble. The next day, the men are put to work, where they are bucking barley. They meet the jerkline skinner, the person in charge of the workers, named Slim. Slim is tall and muscular, and is very kind and accepting of George and Lennie. George quickly trusts Slim and informs him of his and Lennie’s past. Slim promises not to tell anyone and the bond between the two men grows

stronger. After working, all of the men go back to the barn and outside of it, they set up a horseshoe game. The objective is to pin horseshoes on a metal bar by throwing them from a distance. The men tell Lennie to stay inside of the barn because the game might be too complicated for him because he is special needs. As he is sitting in the barn petting a dead puppy and remorsing over the death, Curley’s wife walks in. Lennie tries his best to avoid the woman but she claims that she is very lonely and has no one to talk to. She also tells Lennie about how she hates being with Curley and how she could’ve became a movie star in her old town, but her mother prevented her dream from becoming a reality. Lennie, unable to control himself, tells Curely’s wife about his and George’s dream about having their own house and his passion for touching soft objects. Curley’s wife tells Lennie how she has the same passion, and she lets him touch her hair. Lennie repeatedly strokes her hair, and after Curley’s wife tells him to stop, he keeps on going. After seeing that Lennie would not loosen his grip, Curley’s wife

screams for help. Lennie immediately puts his hand over her mouth and shakes her around,

telling her to not scream because it will make George angry. After a few seconds of rigorous

shaking, Curley’s wife stops moving because Lennie, with his enormous amount of strength,

had snapped her neck. He sees what he had done and decides to run into the woods, far from

the bar. Soon enough, after the men were done with their game, Candy walks into the barn to

retrieve Lennie for lunch. He sees Curley’s wife’s dead body and shouts for the other men,

including Curley, to witness what tragedy had occurred. Curley was immediately able to tell that

Lennie had killed his wife and assembled a search party to find and kill the giant. George asked Slim if he and the other men would be able to lock Lennie up instead of killing him because “he didn’t do it outta meanness”. Slim told George that this would not be possible because eventually, Curley would shoot Lennie. George decided that he needed to find Lennie first instead of letting the other men get their hands on his friend. George travels into the woods and after about five minutes of searching, spots Lennie coming out of hiding in a bush. He motions Lennie to come towards him. Lennie admits that he did a “bad thing” and that he deserved whatever punishment George was going to give him. George told him that he wasn’t mad at Lennie and told him to look into the horizon and imagine the house that they were going to own. Lennie followed his orders and behind him, George was loading his pistol. George tells Lennie to keep on looking forward and imagine the place, and Lennie was bouncing around in

excitement just thinking about how he would pet rabbits to tend and pet. As this was going on,

George could hear Curley and his search party coming closer, along with the repeated barking

of the search dogs. George knew what he had to do and shot Lennie in the back of the head.

This is where the story ends.

language, since it is “old timey”, could get confusing at times. Other than that, I felt it was very

interesting and highly recommend it. It is also very easy to read, as it is only 105 pages. If you

are into books about friendship and old-western culture, this book is the right one for you.