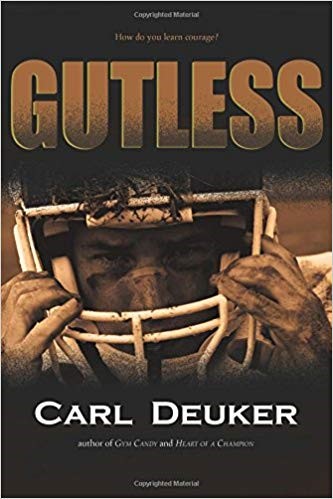 What does it mean to be gutless? The definition is “lacking courage or determination”. For most people, being gutless varies depending on what challenges they face in life. In the book “Gutless”, by Carl Deuker, Brock Ripley, a freshmen coming into high school, faces his fear of contact in a sport that he has never played before: football. I wanted to read this book because I felt like Brock and I shared the same fears when introduced to football for the first time. This urged me to give the book a try, and I was more than happy with choice.

As the book starts off, we are introduced to Brock and his friends. They are at the local park playing the sport that they are all on a team for: soccer. The boys have been playing their whole lives and the sport has become a hobby for them. Soon, Brock goes home to watch a movie with his family. As Brock and his mother enter the car, Brock’s father doesn’t seem to open the door. Instead, his hand seems stuck to the door handle, and Brock’s mother asks her husband why he is not entering the vehicle. Brock’s father simply responds by saying “I can’t”. His mother leaves the car and helps Brock’s father enter the car, and a few weeks later, Brock’s father shows more symptoms of Steinert’s disease, which causes the victim to lose control over his muscles. Soon enough, Brock’s father requires a wheelchair to get in and out of his car. I liked this part of the book because it really went in depth in showing Brock’s and his father’s

perserverance. As time goes on, Brock goes to the park more with his friends. During one of the

days, Brock spots Hunter Gates, the school’s quarterback, being trained by his father. After

Hunter’s father, Bill, sees Brock, and invites Brock to come to them and tells him to to run a few

routes for Hunter. This part was relatable because I was faced with the same problems at first

and I was impressed by Brock’s resilience. Soon enough, Brock was able to catch all of the fiery

balls thrown by Hunter, impressing both Hunter and his father. After 30 straight minutes of

running routes, Bill stops Hunter and convinces him to join the football team and explains to him

that he has the ability to make the varsity team due to his speed and route-running ability. Brock

agrees and takes the permission slip back home to his mother to sign. At first, she is skeptical

because of all of the concussions caused by the sport, but eventually gives in and signs the

paper. Brock gives it to the head coach, Coach Lever, the next week, and the team practices

very hard before the season starts. During this time period, Brock’s “soft side” comes out. He

drills related to strength and contact. For this, Brock gets ridiculed by the varsity receiver, Colton

Sparks. Colton is a good friend of Hunter’s and proves to be a challenge for Brock. After a few

days of tryouts, Brock becomes aware that he made the freshmen team, and at first Brock is

very upset. Following this, Brock does a lot of individual practice at the park, trying to improve.

Soon enough, summer comes to an end and the new school year begins.

Once school starts, Brock goes to his first period: English. There, he spots one open seat next to a short Asian student with “big and poky ears”. The kid introduces himself to Brock as Richie Fang who just moved from Nanjing, China. Brock is very amused by Richie’s ability to make jokes and lighten up someone’s mood, no matter how upset they are. Brock becomes aware that Richie is a soccer prodigy and the two become stars on the soccer team as well. Due to Richie achieving lots of glory, he gets picked on and bullied by members of the football team such as Hunter Gates and Colton Sparks. Soon, it is evident how much Richie is hurt by the bullies. Brock fends for Richie for the most part, but after soccer season ends, it is back to

football. This slowly weakens the bond between the two friends. Even though he is busy, Brock

makes time out of his schedule to go to Richie’s house on the weekend, where he is greeted by

his father and sick mother who is battling cancer. Both Richie and Brock are aware that Richie’s

mother is going to pass away soon, and Richie has accepted this fact. When he reaches the

home, Richie takes Brock to a small shed in the family’s backyard. There, Brock is amazed by

what he sees. He sees a replica of their school, but this model has an extraordinary amount of

details. For example, sunlight, solar panels, trees, students, grass, and even a small stream by

the school, that no one knows about, is evident in the model. Richie explains to Brock that he is

architect/engineer. Brock wishes Richie good luck and before he leaves, he remembers how

couple of balls. Richie agrees and the duo goes to the park. There, Brock is amazed by what he

sees: Richie, who has never played football in his life, can punt a football better than anyone on

the team. Brock then explains to Richie about the phenomenon he sees and convinces Richie to

come with him to one of his practices. Once there, Richie is introduced to Coach Lever and

enough, Richie is starting as the team’s punter and PAT kicker. After kicking a few

game-winning field goals in the season, Hunter and Colton lay off of Richie because he is

winning games for the team. Brock is alongside Richie in this entire journey because he is now

a starter on the team as well and has caught a few game-winning touchdowns, which is a

significant accomplishment. It seems as if everything is looking well for the team until their last

The team is up by one point with 5 seconds to go in the fourth quarter. It is Coach Lever’s team’s ball and all they have to do to win is simple: run the clock down. Coach sends Richie out to line up in punt formation, but he has to take a knee as soon as he catches the ball. This will lead in time to be lost and the game will eventually end. Richie follows his coach’s directions and once the clock says :00 on it, the team rejoices because they have won their last game against their rivals. Richie throws the football in the air and celebrates with his team. Just as the team is jumping with joy, they hear a loud roar of cheering from the opposing team's side. They look back at the score and the opposing team won by two points. Coach goes to the referees for an explanation and becomes aware of a rule that everyone had ignored. As soon as a football game ends, the ball has to be walked over to a referee to formally end the game. Richie had thrown the ball in the air and one of the opposing team’s linemen had caught the ball in the endzone. This counted as a field goal, three points, and the opposing team had won the game. The bus ride back for Brock and his team was very quiet. No one expected the game to turn out like this and everyone had thought that they had the game in the bag, but this did not happen.

Once at the school, Brock walks Richie back to his house, explaining to him that the loss was his fault and the call was based on a “stupid rule that nobody knows”. As the two go back into Richie’s shed, they are perplexed and horrified after what they see. Richie’s model is broken into bits, with pieces of the replica everywhere. It is evident that Hunter, Colton, and their other friends had entered the shed after the game and broke the model in anger after Richie had lost them the game. Suddenly, the door closes behind them and three men with masks appear. One of them pins Brock on the floor while the other two beat Richie up. Brock was helpless because the man on top of him was very strong and he was trying to tell the other two to leave Richie alone. After about five minutes, the men leave and Richie is crying on the ground, covered in bruises. Richie is very frustrated and tells Brock to leave, which he does. Brock goes home and tells his father about what happened and his father urges Brock to tell someone, whether it be the principal or coach. Brock knows that this would be of no use because he did not see a face, so he has no proof. Brock decides to take the next day off from school and goes to Richie’s house to see how he is holding up. When he arrives, he sees multiple cars parked outside the home and even an ambulance. It is quite evident that Richie’s mother had died. Richie’s father sees Brock and invites him down to the basement to talk. Brock asked Richie’s father is he could see his friend and his father informs him that Richie had left for school, very angry, five minutes ago. Brock then looks to the corner of the basement where there is a mahogany box that contains a gun that Richie once showed his friend. The box is open and Brock immediately makes a run for the school. When he arrives, he sees all of the teachers and students running out of the school. Brock asks one of the students what is going on and he responds by telling Brock that Richie is holding Hunter and Colton hostage in one of the restrooms and that he has a gun.

Brock enters the school and knocks on the bathroom door, informing Richie that it is his friend Brock. Richie tells Brock to go away and that he doesn’t want his friend to be caught up in his mess. Brock enters the bathroom where he sees Colton and Hunter lying on the floor, both men sobbing, scared for their lives. Richie is above them with the pistol pointed at Hunter. Before pulls the trigger, Brock takes the gun from Richie and throws it to the corner of the bathroom. Then, everyone hears police sirens outside and can hear the footsteps of multiple officers approaching. The two hostages run out of the bathroom and into the safety of the officers. Brock tells the officers that him and Richie are walking out and that there is no gun. The boys exit with their hands on their heads and are immediately handcuffed. Brock tells the officers about what had happened and Richie is held in a juvenile detention center, where he sees no visitors. Soon enough, Brock becomes aware that his friend had moved back to China and that he would never see him again.

In my opinion, “Gutless” was an amazing book. I would rate it 5/5 stars because it showed how a friendship evolved and grew stronger. Some parts I liked about the book were when Richie scored the game-winning field goals and when Brock caught the touchdowns because I can relate, due to the fact that I witnessed these events firsthand on my football team. I highly recommend “Gutless” to readers that love football and stories about friendship.