Harry Potter and the Sorcerer’s Stone by J.K. Rowling 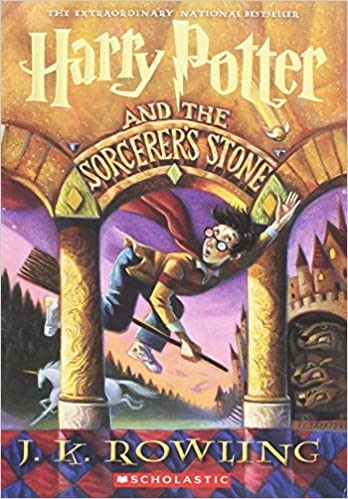 Harry Potter and the Sorcerer’s Stone by J.K. Rowling is the first in the series of seven books by

this author. In this book, Harry Potter, the protagonist, is an orphan whose parents died when he

was only a few years old. He lives with his aunt, uncle and his ill-mannered cousin and his life is

miserable. His aunt and uncle did not want to be burdened with the task of raising him but they

did so anyway. They treated him like a servant, made him sleep in a cupboard under the stairs,

do all the chores, and wear only gray dyed, hand-me-down clothes from his cousin.


Just before he turns 11 years old, Harry receives a letter addressed to him and invites him to

attend Hogwarts School of Magic. His aunt and uncle try to prevent him from reading these

letters. They even travel to remote locations to try to escape the many, many that were arriving

daily. Despite their efforts, Hagrid, the game-keeper from Hogwarts, finds Harry and hand

delivers the letter. He explains that Harry is a famous wizard and Hogwarts is where he is

supposed to go to school.

and meets other wizards and magical people. A key moment occurs on the train ride to school

when Harry meets two other students, Hermione and Ron, who will be his best friends and

confidants through all the books. These important supporting characters help Harry gather clues

a few minutes of reading it, my wildest expectations for the book were exceeded. It goes into

much more humorous detail and character backgrounds than the movie.


To me the book is successful because of the strong contrasts and metaphors. For instance,

try to shield him from his wizarding past. They do not give him nice clothes or toys like they give

their own son, yet they are concerned about how Harry’s hair looks. They terribly spoil their own

son and yet they make Harry do chores and he is not spoiled at all. Harry’s humble childhood

everything that is good. He is just the polar opposite of the main evil wizard, “He who should not

he encounters. These are life lessons that everyone should aspire to and imitate. An example is

that have been happening around him. He risks disobeying school rules to pursue answers to

his questions. In another instance, Harry stands up to a student for harassing a fellow classmate

and Harry is rewarded by landing a spot on the Quidditch team.

magical world that parallels the regular world we all know. Some examples are the owl postal

delivery service, goblins who run the bank and the secret train platform at the station.

the other student characters Harry encounters. Additionally, the talking paintings inside the

school let the reader into insights into the story that are not told by the main characters.


Overall, I enthusiastically give this book a 10 out of 10 and would recommend it to people who

like fantasy and for people who are ages 9 - through adulthood. It is addictive to read and hard

to put down. It is the foundation to understanding the entire series about Harry Potter because

one book builds upon the next. It made me want to read all seven books, which I did. Lastly, it is

think about how they too can develop and publish as captivating a story.

Checkout Harry Potter and the Sorcerer's Stone at the Newport Beach Public Library.