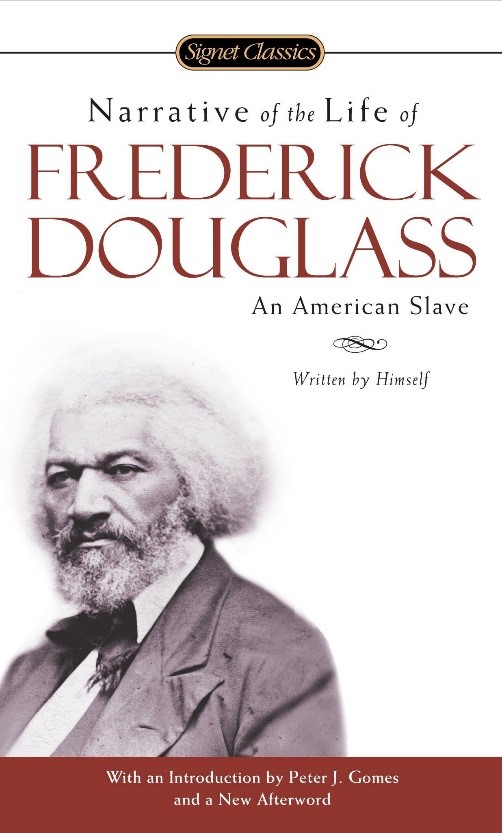 The Narrative of the Life of Frederick Douglass is a biography detailing Frederick Douglass’ experience as a slave and his journey to finding freedom through literacy. He was born into slavery sometime in 1817 or 1818 with no recollection of his birth and a faint memory of his mother, Harriet Bailey. His father was supposedly his master, Captain Anthony, who helped run Colonel Lloyd's plantation. On the plantation, Douglass describes the cruelty the masters use on their slaves and the terrible living conditions. Eventually he is transferred to serve Hugh Auld where he becomes first exposed to reading. From then on, Douglass continues to pursue a higher education in secrecy, developing a stronger hatred for slavery and his current condition as a slave. After being relocated to different slave masters, he eventually builds up the will to escape.

Although biographies are typically boring, the violence and brutality Douglass witnesses and describes during his life make it everything but boring. Douglass uses detailed imagery to describe the results of the brutality of slave masters, describing the screaming and bloodshed. This might make the book not appropriate for all audiences. He also contrasts the opulent lifestyle of plantation masters with the degrading conditions of the slaves. While narrating his life, Douglass also describes his inner thoughts at a certain point in his life. Readers get to follow Douglass through points where Douglass feels immense hope for freedom as well periods of intense despair and hopelessness. Douglass also alludes to great historical figures and biblical allusions which give more characterization in his narrative but also make it more challenging to understand. However, he overall keeps the narrative reader friendly with simple vocabulary and succinct sentences.

Something I really like about the book is its pacing. The book does not overstay on a certain point in Douglass’ life, giving the reader a continuous supply of new characters and new challenges. I also enjoy how Douglass develops characters by giving in-depth analysis to their psychology. However, I was disappointed when Douglass refused to detail the actual journey he took near the end of the story to escape to the north out of fear that it would compromise the escape of other slaves.

Overall, this book gives readers more historical knowledge and a more in depth understanding of the cruelty of slavery. We see how people dehumanize slaves by whipping them and putting them in filthy living conditions. Watching Frederick Douglass continuously fight for knowledge and freedom also teaches readers to defy injustice and be determined to reach their goals. Douglass’ narrative also has themes of hypocrisy as we see slaveholders justify their cruelty with religion and the idea that ignorance is bliss as the more Douglass learns, the more he loathes his condition. I would overall rate The Narrative of the Life of Frederick Douglass as a 8/10 book. The book is definitely very informative and very entertaining, but the lack of certain details like the journey Douglass took to get to the North make it short of a 10/10. I definitely recommend this book to anyone who wants to get a deeper understanding of American history and how knowledge became the path to freedom for such a famous American figure.

Checkout The Narrative of the Life of Frederick Douglass from the Newport Beach Public Library.