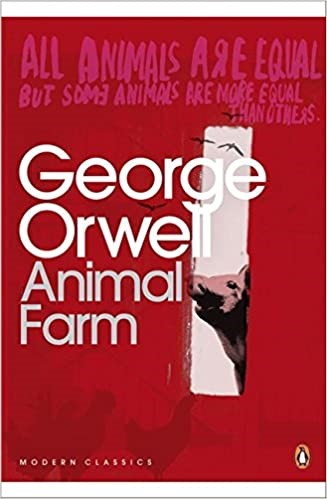 Animal Farm is a book about a struggle for power in which animals overthrow the humans leading the farm. This book, as a whole, is an allusion to the Russian revolution. The book is set on an English farm known as Manor Farm. One day, the oldest pig in the farm, Old Major, tells the pigs that they should rise up against the humans at the farm and instead rule the farm themselves. Old Major says that this will be a more prosperous way of living. However, soon after Old Major gives this speech, he passes away. Then two other pigs, Napoleon and Snowball, come into power to lead a rebellion. They successfully vanquish Mr. Jones, the owner of the farm, off of the property, and the pigs rename the farm Animal Farm. From here, the pigs establish the 7 commandments, which are, “1) Whatever goes upon two legs is an enemy. 2) Whatever goes upon four legs, or has wings, is a friend. 3) No animal shall wear clothes. 4) No animals shall sleep in a bed. 5) No animal shall drink alcohol. 6) No animal shall kill any other animal. 7) All animals are equal.” At first, these principles and the joint leadership of Napoleon and Snowball causes animal farm to do well. However, soon, conflict arises between Snowball and Napoleon. They start to disagree on more and more stuff concerning the future of Animal Farm. One day, Snowball proposes an idea to build a windmill that generates electricity. However, Napoleon opposes the plan. At a meeting where they vote as to whether to build the windmill, Snowball delivers an eloquent and persuasive speech. Napoleon, on the other hand, barely responds at all to Snowball’s speech. However, he makes a high pitched whimper and 9 dogs which he had trained bound towards Snowball and chases him off the farm. After Napoleon stages his coup, he starts to use propaganda to make it seem like Snowball has always been a bad pig and does not have sufficient loyalty to Animal Farm to lead. Then, bit by bit, Napoleon works  on destroying the foundations of Animal Farm and all of the principles relating to it to start living a more extravagant lifestyle.

This book was really good, and I found it to be pretty easy reading. I thought that the allusion to communism was very clear, and it was not overly confusing. I liked how obvious the author made the similarities to the Russian revolution very clear through the use of words like “comrade.” I also thought that it was nice that it was a very short and concise book. I felt that it was really a perfect length because the author developed the characters and storyline very well but at the same time it kept it short and sweet so the reader was not bombarded with extra unnecessary details.

I really liked this book for many reasons. I have always been interested in the spread of communism. This book gave me a little bit more of a sense of what it was like to be in Russia as the government slowly changed its strategies to benefit the government workers and shaft the Russian working class. I also thought that all the characters seemed very real, and it was easy to empathize with them.

I would rate this book a 10/10 because I really enjoyed reading it. I recommend to anybody who does read it to do some research about what each character represents because that adds a lot more depth to the story. When I did so, a lot more of the minor characters’ roles made a lot more sense to me. I think that anybody who likes history or wants to learn more about those historical events should read this book.