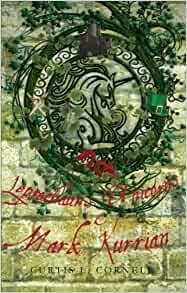 Leprechauns, Unicorns, and Mark Kurrian by Curtis L. Cornell is a fantasy about a

young boy named Max Garret and a man named Mark Kurrian. The story begins when Kurrian saves Max’s mother from getting mugged; shortly after Kurrian befriends her son, Max, and becomes a father figure to him. One day, Max’s mother is diagnosed with a rare disease that has no cure, but Max is determined to help his mom even if it means believing in the impossible. Kurrian reveals to Max that he is not from this world, but is from the world of Serenium which is full of all sorts of creatures including leprechauns, fairies, dragons, and many more. Kurrian tells Max that the only thing that will save his mother is a unicorn's horn, but there is one problem: two of the remaining unicorns have been imprisoned and the third has been missing for many years. Max and Kurrian then embark on a journey to save the unicorns and Max’s mother by traveling across Serenium. Throughout their journey they realize that the villain of the story, Kendron Lorcan, has unleashed so much evil and sorrow all across Serenium that no one is

willing to stand up to him and help Max and Kurrian. On top of this, Kedron has put a spell over Serenium that has the ability to locate anyone that uses magic, so Kurrian powers are useless if they want to avoid his grasp. Max and Kurrian face many challenges and run into ferocious creatures along their quest, but are not faltered.

I really enjoyed this book because I love reading anything fantasy, but also because of the various characters and creatures. Like any fairy tale the characters are either completely evil or purely good, but the author did a good job of mixing in a main character that doesn’t follow those rules. A pirate named Peg-Leg Bill agrees to help Max and Kurrian and he is ridden with internal struggle. You get to see his character develop from being a stereotypical pirate that is in it for the money to someone that is willing to sacrifice his life for both Max and Kurrian; I think for this reason he was a great addition to the story.

A critique that I would make to the book would be to try to make it less predictable. The

author does a great job of keeping you engaged with new creatures and little adventures, but ultimately you know that Max and Kurrian will make it to their end goal.

Overall, I would definitely recommend this book to someone because it is well written in

the way that it entices you with a completely new world full of creatures that  demonstrate the depths of the author’s imagination. Each chapter is a new and exciting step that the characters need to pass in order to reach their goal which made it very easy to read.


If you love fantasy and want a book that will challenge your own imagination, I would definitely suggest reading Leprechauns, Unicorns, and Mark Kurrian.