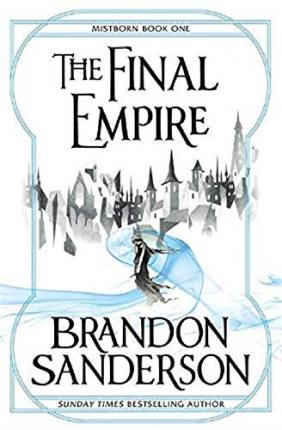 Eating metal to gain magic has to be one of the strangest magic systems I have come across in a book series, but surprisingly enough Mistborn: The Final Empire was an engaging and interesting book. The book centers around an orphaned girl named Vin, who discovers with the help of her future mentor Kelsier that her “luck magic” that she has used to survive in the streets is actually part of a set of powers passed down from her father, and she is actually “Mistborn”. The book mostly focuses on Vin and Kelsier trying to take down the “Final Empire,” which is the current empire and ruling system that is extremely cruel to the farm workers and servants, who are slaves to the nobility.

If you are a fantasy reader, you have definitely noticed that almost every book with magic has a certain “system” or rules set in place that the magic follows. Sometimes the author will break the rules or reveal new rules, and sometimes, such as in The Lord of the Rings, the magic system is incomprehensible and not accessible to the reader or the protagonist. As is typical for this author, Brandon Sanderson, this book has a “hard” magic system, or one that for the most part has clearly defined rules and boundaries.

In this book, the magic revolves around someone with a magic bloodline, called a “Misting” consuming a certain kind of metal and gaining temporary abilities. “Mistings” could use one kind of metal, while the main characters (Kelsier and Vin) were “Mistborn” who were able to use every kind of metal. Compared to other books with a similar premise- as in girl takes down a corrupt government- I found that this book’s magic system was fairly easy to follow and understand for the reader, provided you checked the guide to it in the back of the book if you forgot what a certain metal did. I really liked this magic system, because it lets the reader predict events and leaves a lot of mysteries open for the reader to think about and look for hints throughout the book. I also liked how the book characterizes Vin- her character arc is about opening up to others, making friends, and becoming a better person while she also improves her abilities.

Another part of the book I did like was the different perspectives and plotlines it followed throughout the rebellion against the Final Empire. However, a lot of these plots ended in an unsatisfactory way, so I think a lot of the side stories could have been expanded upon or left out entirely.

Some of the things I was less enthusiastic about in this book were the unnecessary length, and some of the subplots, as well as the ending. A lot of events, like when Vin attends the balls to spy on the nobility, felt very repetitive and useless. The other part I did not like was the way it ended- I won’t spoil it, but it did feel anticlimactic and seemed to kill off characters who didn’t need to die. The romantic subplot also wasn’t that great- Vin and her love interest didn’t really have chemistry, and the entire subplot felt unnecessary to the greater plot of the book.

Overall I think this book is great for fantasy enthusiasts, and for people who are okay with longer and more long-winded books. I would really recommend it to people who typically enjoy science fiction or dystopian stories, since this book is fairly similar to those genres. I wouldn’t recommend this book if you are looking for a more fast-paced book, or if you are looking for romantic subplots in particular. I would personally rate it a solid 8/10.