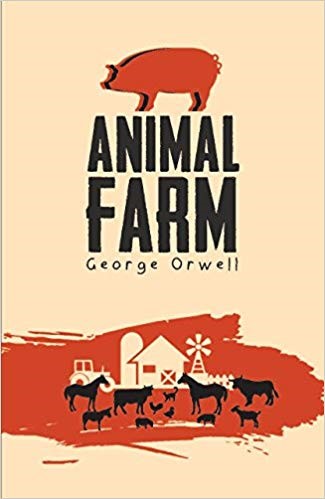 Fed up by the Farmer Jones’ dictatorship on the farm, the animals plot to rebel against this tyranny. A well-planned attack was all it took to chase the men out the farm, and with their newfound freedom, hope for a better future with less work, better education, and more food flourished.

That is, until a fight for power rose from within the farm as intelligent pigs, Napoleon (symbolizing Stalin) and Snowball (symbolizing Trotsky), battle to take the throne, seeking to become the next Jones of the farm. In war, it’s always the citizens who suffer most. Sunday debates, battle bravery, as well as dirty manipulation take heed as the pigs spit lies to the farm until only one winner remain.

The pigs kept a strong grip on the uneducated society, buying their blind faith with their intelligence. Under the veil of helping the animals, the pigs demanded benefits, saying “‘Do you know what would happen if we pigs failed in our duty? Jones would come back! … so it was agreed without further argument that the milk and the windfall apples… should be reserved for the pigs alone’” (Orwell 27). Through the pigs’ use of the fear, they convinced the easily-swayed society for their own selfish gains. Their education and skill in manipulation stringed the confused society into obedience, causing them to fall under oppression. Being uneducated, the animals were unable to discern these lies, and therefore unable to escape the bounds of this invisible slavery.

On the surface, Animal Farm seems to be a simple tale of animal revolution, but deep down, it criticizes the communism reign of the Soviet Union. It sheds light on communism and its potential flaws. In this novella, George Orwell details the obstinate society and the oppression they fall victim to. He narrates the allegory as the pigs twist the original intentions of their rebellion. Using education and intelligence as their biggest weapons, they mold the farm into an unthinking society all for their selfish desires.

Knowledge is power, a power that separates the blind from the seeing when faced with oppression. The pigs use their intelligence to restrict and censor information vital for public ears in order to push society into docile submission. Without education, the farm is left with their ignorant faith, unable to see, unable to rebel. Only with education can some hope to be overcomers.

Personally, I greatly dislike the third person perspective this novella is written in. Though it provides the proper lens of how one would analyze history, it gets dull when I find the ending predestined and am unable to fully root for a specific side. The helplessness in how we can’t change history is real.

Nevertheless, I rate Animal Farm a 9/10. I would heavily recommend this book to those who love politics and with the patience to practice introspective thinking into each character. Orwell’s research into the Soviet Union is mind-blowing, but it’s up to you whether his symbols go noticed. Though this book could pass as a nighty-night story, knowing more about the uncapped leadership in the Soviet Union will spice up the read as you realize how Animal Farm mocks communism with irony.

Check out Animal Farm at the Newport Beach Public Library