Same Kind of Different As Me by Ron Hall 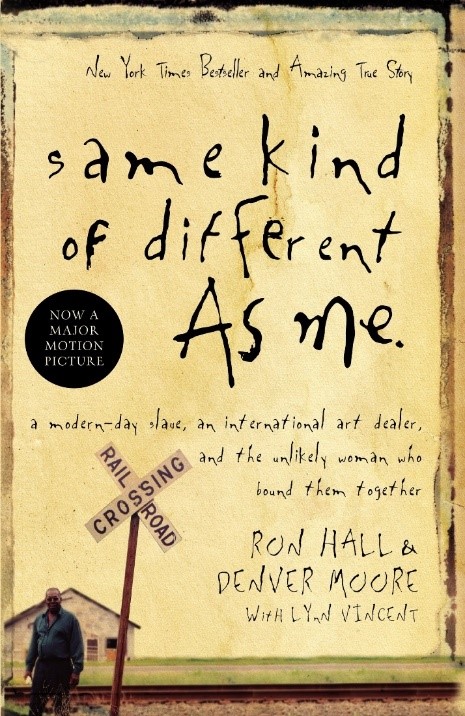 In Same Kind of Different As Me , Ron Hall and Denver Moore allow readers to step into

their lives and feel the pain and love that eventually allowed the two mens’ paths to cross. From

a Louisiana plantation to a million dollar mansion in Texas, readers view the 20th century

through the lens of both a black laborer and a white rich businessman, men who at first seem to

have too large of a space between their economic positions in society to ever meet each other.

Denver is a cotton field worker who escaped a white man’s plantation and rode a train to Texas,

societal position. Alone and broken from the loss of too many loved ones, his heart hardens and

he runs away from both the law and his inner goodness, wisdom, and hope. Ron, on the other

hand, marries his caring, religious college sweetheart, Deborah, and together, they endure

hardship and betrayal that strengthens their love and makes them successful. Through God’s

will and Deborah’s faith, these two men meet and soon become friends who must rely on each

other for emotional support to endure the tragedies that soon occur.

As they get to know each other, Ron and Denver move on from their stereotypical views

of each others’ contrasting social groups: Ron realizes that homeless people are not people he

should “not touch” for fear of catching infections and diseases. His heart changes from acting as

a mere donor of kindness to actually caring about and even learning from his poor, yet wise

friends. Meanwhile, Denver’s heart softens as he recognizes that not all “rich white couples” visit

homeless shelters only because they feel guilty about their own successes. Ron and Deborah’s

desire to befriend them and help them achieve the happiness and hope that they lost. As

readers watch the authors’ lives unfold and their perspectives broaden, they also realize that a

simple, but genuine act of kindness can lead to an even greater possibility, the possibility of a

shared relationship that cannot be broken.

Throughout the story, Ron and Deborah are dedicated to sharing their religion and

spreading God’s word and love to those surrounding them. However, when Ron must face and

fight an unexpected tragedy alongside his beloved wife, he begins to blame and become angry

at God. Feeling betrayed and heart-broken, Ron’s faith gradually starts to disappear. However,

would prove to show reason for such tragedy. As readers witness these authors’ lives, the

powerful messages that lie within the events causes readers to endure the forgiveness, tears,

and gratitude that the authors endured.

touching, I was not engaged in the events until I was a few chapters in. The introduction was

slightly boring. However, after the introduction, I began to feel the authors’ emotions and learn

about the power of faith, promise, and an unbroken friendship. I would recommend this book to

for their inner qualities.